Learning to play an instrument is a series of small victories. First you learn how to create sounds, then press keys accurately. Soon you’ll know the names of all the notes, and how octaves are just the same notes but played higher or lower. Eventually you start playing chords and playing with two hands at once. You might even understand how to play a few small songs or some simple first scales. But most musicians will agree that learning to play your A major scales is a real stepping stone toward your musicianship that requires serious dedication and understanding.

What makes the A major scale so unique?

The real uniqueness and difficulty of the A major scale comes from the fact that all of a sudden you will be using three sharps. But the sharps is not why it is so difficult. It is because now almost every one of your chords and scales will be involving sharps. This means you have to start understanding the key logic behind playing scales and using correct fingerings.

You need to make sure that when you’re playing an A major scale you’re always aware of where your thumb is. As pianists we try never to put our thumb on black keys when we’re playing scales if we can help it, because having a thumb on the wrong key or in the wrong playing position will make it very hard for you to move quickly down or up the scale without repositioning your hand.

Understanding the A major scale

Scales are a collection of notes written in alphabetical order that are a certain distance apart from each other. All scales follow these rules, which allows us as musicians to understand which notes and which half steps and which scale degrees we need to use. We separate all piano scales into two parts, the root and the quality. Let’s learn the A major scale piano now.

Our root note is the note where we begin counting all of our scales from, and the quality is the other half of our formula. If we’re playing a major scale, the quality of our scale is major. If we’re playing a major pentatonic scale, the quality is major pentatonic. From this we can understand that all scales that share the same quality, have exactly the same formula of half steps and whole steps between each scale degree. This means that by learning our C major scale very carefully, we can apply all that knowledge and practice to every other major scale on our instrument! The only scale that doesn’t apply to this is  the chromatic scale, so be careful! 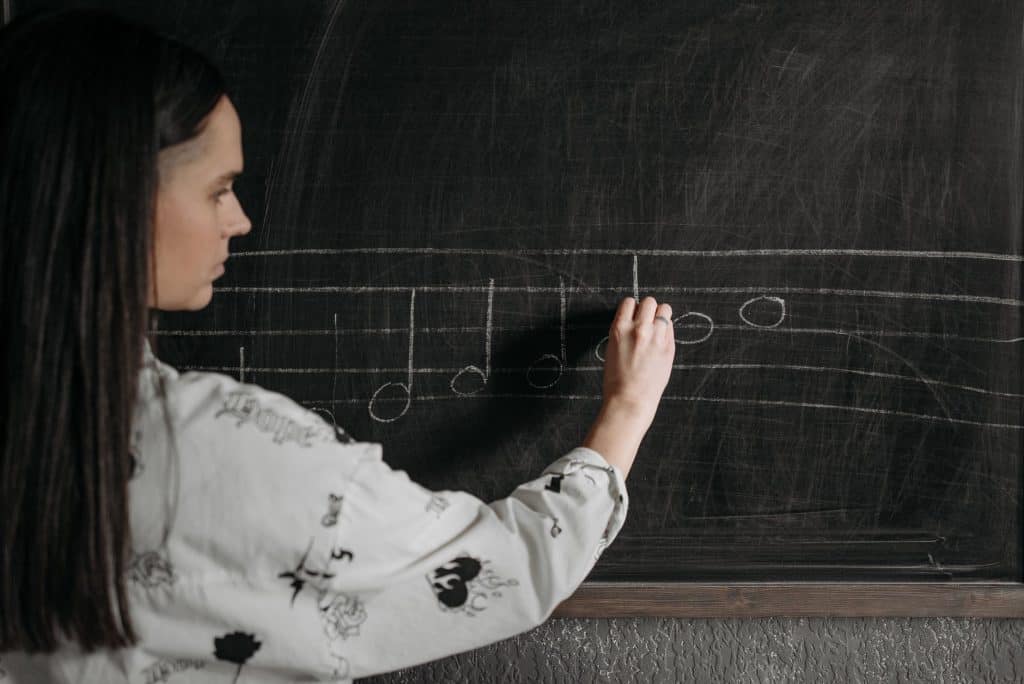 Our formula is the same for all major scales. Make sure that you memorize this as it comes up a lot. You can also look down at your keyboard and count the half-steps between C and the C an octave above. Those are the notes of our C major scale, so by learning that, you can re-count the notes.

A major scale uses three sharps, C#, F# and G#. To find these notes we find out letter named white key, and then we move up one half step to the note just above. This makes the note a sharp. For playing in the key signature of A major, we always play the sharps for C#, F# and G#.

Starting on our root note of A we follow our major scale formula:

This gives us these notes:

Pay very close attention to the note C# and D. Notice that when we play our C# we do not continue afterward with our 4th finger. Instead what we do, is that we swing our thumb underneath the middle finger playing C# and then pass behind it to play D. 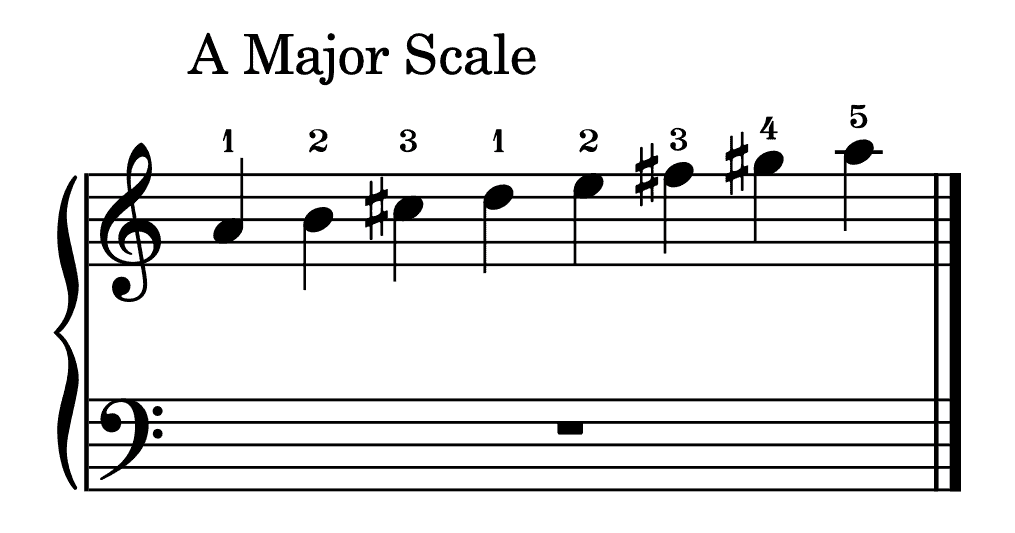 Notice that when the left hand completes the first 5 notes we are in a very comfortable and simple playing position. We have kept our thumbs off of the black keys, and we have instead played them with the middle finger. Pay close attention to the note F# in the left hand.

Playing a blues with A major pentatonic

One of the most common ways to play piano with friends or alone is by playing what is called a Blues. The Blues are a specific style of music, like a Waltz or a Jazz-Standard or a Fugue, and the blues scale, patterns, chords, and song-forms of Blues’ are typical and easy to learn, but hard to master. 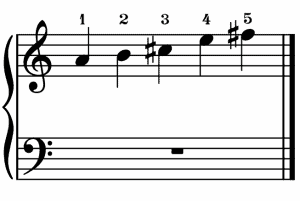 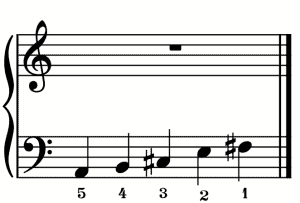 Both hands should be very comfortable and playing these sounds just as awesome and fun as playing them from our other scale patterns. Make sure to practice them playing forwards and backwards, ascending and descending. Turn on your metronome and play away with these. You can use hands together or hands apart. A fun idea to do is to play some piano chords in your left hand, and then improvise using the major pentatonic scale over your right hand.

Summing up the A major scale

Learning how to play scales accurately and quickly is one of the best things you can do to increase your musicianship and practice exactly what you need to at any time. The other best thing you can do to practice is to use an online tool, or piano learning app like Skoove’s free trial to take advantage of all the online resources that can help you become the pianist you’ve always wanted to be. You can learn songs in any key, use their metronome, and learn how to play all types of different exercises from contemporary musicians and classical musicians! It has never been more convenient to learn how to explore piano music on your own time and at your own pace than it is right now, using online piano lessons today!