Knowing how to play every type of chord is an important part of learning how to play the piano well, because you will often see song chords with just written out barre chords for piano, and for a different instrument, where you will be expected to play barre chords on the piano. This can be incredibly complex, because a lot of the indicated information provided by sheet music will actually be missing, but you will still be expected to know how to, as pianist, play guitar chords. This can be achieved fairly simply by just knowing which things are intended by the chord symbol, some basic spelling, and a few little tricks to make sure you’re playing the correct inversions, regardless of what symbol you’re seeing on the instrument.

What is a B minor chord

Bm piano chord progressions or B minor chord is the exact same as when you see an A minor chord, or a C minor chord, we have just changed the root note to beginning to be spelled from the note B. The B minor chord is actually a bit more tricky than these other listed chords, because a B minor piano chord actually includes and necessitates using the note F#, typically played by the pinky finger. Because of how inversions work on the instrument, sometimes that note can be played by the pinky finger, but sometimes the middle finger and sometimes the ring finger, or pointer. Inversions are one of the most powerful things to understand on the instrument.

You may notice that we have not indicated which finger is going to be used for which, because this actually changes depending on if we are playing the chords in the left or right hand. When a musician sets out to learn chords, often they are looked up like a musician would look for a recipe, trying to find the exact ingredients to put in so that each part of the recipe is represented, and measured out perfectly. However, since as pianists we can play chords with two hands, or with either hand, it requires a little more thinking than this. In order to learn what notes are in a B minor chord, you need to first learn which order each hand would play. A B minor chord piano and a B minor triad are the same thing.

Here is the sheet music representing the left and right hand for all three chord inversions of B minor. If this cannot be read, below you will find also all of the chords represented in grid for, corresponding for each fingering. These diagrams in sheet music contain each of the inversions, root position, first inversion and second inversion, written for both right and left hand. The right hand is intended to be played with the notes written on the treble clef, whereas the chords written on the bass clef are intended to be played with the left hand. The fingerings have been adjusted in both situations to make sure that they will work, the fingerings are different for each hand. 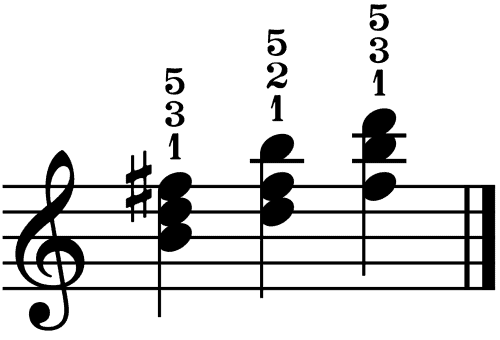 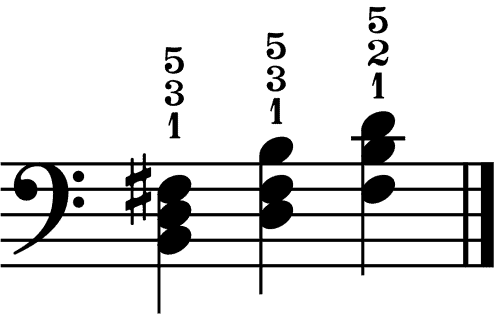 The simplest way to think about how inversions work is by comparing a chord to a triangle, or to a basic geometric shape with three sides. Once you can imagine that we are using a shape, we can then imagine that all three sides have a label. Once we have a shape set, we can imagine that we take that same shape and rotate it, allowing each side to be on the bottom most. This is the way that musicians use and think about inversions, we take the shape and by rotating the chord, since the notes are the exact same for each of the shapes, even though the lowest note is not the root, the chord still maintains its identity. So, our first inversion now has our root on the top of the chord, instead of on the bottom of the chord, as was placed earlier.

The second inversion of any chord is the same principle as the first inversion, except now we have put what was the top note of our triad shape that was played by the instrument on the bottom, where it was existing first as a Bm chord on the top. This allows us to play our Bm without needing to switch the sounds, using the same notes as the beginning version, except now our fingers are in a different order in the key. This allows the sound to be slightly different, but as a tip, try not to think of this as a separate chord from B minor, think about it and listen to how similar it is to your other minor chord in root position, but this version just happens to be rotated slightly.

When to play inversions of the B minor chord

Simply put there are going to be many situations where as a pianist you will need to play inversions instead of playing chords that are written in their root position. The most common reason to use an inverted chord instead of a root position chord is when you’re playing in a position, in a position and in a key, and you are able to change quickly to the notes in a different chord without needing to move your entire hand. For instance, if you’re changing from a B minor chord to a D major chord, we first think about if those two chords have any notes in B minor chord, or notes in common. How to play piano chords B minor and D major:

In this case, since the two chords here share two different notes, you would try and maintain the finger positions in this version of the music, and then only move the note that isn’t here, often by just moving your pinky or thumb by one or two keys. In this case, we just change our B note to an A note, and now we’re playing a D major chord in an inversion, but it allows us to only change one note instead of moving our entire hand up or down in either direction. It is always easier to play a chord by moving one finger in songs, than a version that needs to move all three fingers. These seem like they are difficult at first, but soon you’ll see that the easy versions of chords with inversions are actually an easier version of a chord to play than the opposite by moving the entirety of your hand in either direction.

To learn how to play B minor chord arpeggios on piano in one position, you will simply use the identical fingerings found in the previous sections for playing the chords in a regular position.

Songs in the key of B minor

Play popular songs with the B minor chord

Edward Grieg – In The Hall of the Mountain King

Edward Grieg was a very famous composer, who wrote a lot of incredible music in the 19th century. His song In The Hall of the Mountain King is an ode to a different time, that allows even beginners to use the versions of the easy B minor chord explained here, and provoke the same sense of grandeur. This is a common chord progression in B minor.

An incredible song to play the b minor in, is this classic ballad Green Sleeves. Here you will only play the chords in the left hand with two fingers, but the right hand will be playing the minor third of the chord. The inversions only happen sometimes, but by putting the third of the chord in the right hand it allows the left hand to play perfect fifths, providing a deep and rich, and open sound in your instrument.

This concept of relative major and minor keys allows all musicians to quickly apply all of their knowledge from one key and apply it to the next key, and play all of the chords and achieve a fuller sound than you would ever have though previous before.

River Flows in You – Yiruma

Yiruma is a South Korean pianist who has been taking the world by storm with his song River Flows in You. This song uses many different chord inversions of the B minor 7 chord, or jazz chords on piano. It is best to take small breaks, rest between each hand as you learn, and approach this complex song with a beginner’s mind until you’re able to capture the sound of the instrument and his performance in your playing.

Final thoughts on the B minor chord

Learning how to play difficult chords on the instrument is the best way to increase your skill level on a new instrument. While playing your new chords, don’t fret and become frustrated while you’re exploring the new notes and the new arpeggios and inversions. It is best to make sure that each of your fingers has a sense of independence, and that you can transition simply between all of the different inversions, and once you have this mastered it is of course best then to work into moving with new chords, and combining all that you have learned together with this article. The best way to improve yourself and include all of your playing is to use Skoove’s in-app metronome, and hand separation in order to play the best you can. Start your free trial with Skoove today!