How many chords do you need to play music?

Remember, to get the most out of these posts, you should really consider trying out Skoove Premium. It’s the premier way to learn piano on the internet. With over 400 lessons tailored to all experience levels and musical tastes, Skoove Premium is a great way to learn to play piano. Don’t forget, you can always try out a free seven day trial, just to get a feel for the program. You won’t regret it!

Have you ever heard a song and recognized the chord progression from another song? In popular music, there are a few different formulas for chord progressions that are extremely successful. These chord progressions have a certain nostalgia, power, and feeling to them. They are used so frequently that the listener has a subconscious expectation of what is coming next, which delivers a feeling of satisfaction.

The main chord progression that we will talk about here is especially common in popular songs from the 1940s, 50s, and 60s, but is also common in contemporary popular music and is featured in many lessons on Skoove Premium.

So what are the four chords you need to learn to play?

The four piano chords you need to learn how to play to unlock literally hundreds of songs are: C major, A minor, F major, and G major. That’s it! I just gave you the secret formula for the successful careers of many popular songwriters from the hits of Ben E. King and the Righteous Brothers all the way to Justin Bieber and Ed Sheeran. So how can you learn to play these basic major and minor chords? Check out the diagrams and examples of these piano chords for beginners below to get started!

How to make a C major chord

The first piano chord you will learn how to make is called C major. Remember that piano chords can be called major and minor (and a lot of other things too). Descriptions like major and minor chords refer to the sound and shape of particular chords, not to their relative importance.

Check out the diagram below to see a C major chord on the piano: 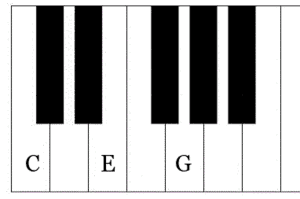 To play this chord with your right hand, place your first finger on C, your third finger and E, and your fifth finger on G. Then, push down all three notes together. Voilà! You have learned how to play a C major chord!

To play this chord with your left hand, place your fifth finger on C, your third finger on E, and your first finger on G. Once again, push down all three tones at the same time.

How to make an A minor chord 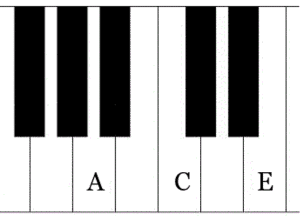 How to make an F major chord

Check out this diagram below to see and F major chord on the piano: 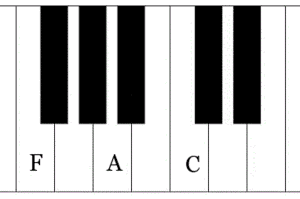 How to make the G major chord

To learn how to play the G major chord, check out this piano diagram below: 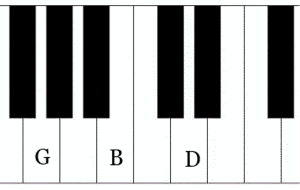 Did you notice any patterns between these four basic piano chords for beginners? All four chords use the same fingers in the same positions. Your third finger always plays the middle note in both hands. C major and A minor share two notes. A minor and F major share two notes. In both cases, the bottom two notes of the first chord become the top two notes of the second chord. Wild! G major does not share any tones with any of the other chords.

How to use these four basic piano chords in some songs

Now comes the moment you all have been waiting for: how to use these four basic piano chords in the context of a song!

Here is a short list of popular songs that use these four chords:

First, check out the progression of “Unchained Melody” by the Righteous Brothers. You can find this tune in the Beginning Song Course in Skoove Premium. Checking out these Song Courses on Skoove Premium is a great way to learn piano.

Those chord symbols let you know which chord to play in a measure. So, instead of playing the root note C in your left hand, you could play a C major chord instead. Try it!

Here is another example from the Beginner Song Course on Skoove Premium, the classic tune by Ben E. King, “Stand By Me”:

Try to apply the same approach in “Stand By Me” that you did with “Unchained Melody.” First, get a grasp of the melody with your right hand and the root note with your left hand. Then, try to sub out the root note in your left hand for the chord notated with the chord symbol above the measure. Here is a recording of the original song for reference:

You can also try to combine the root note in your left hand with the chord in your right hand as in the example below:

Also, there is an additional chord symbol in “Perfect” in the last measure. Gsus4 is spelled G – C – D and looks like this on the keyboard: 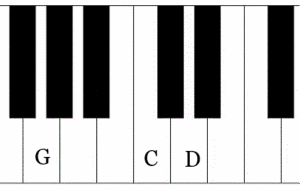 Many of these songs are available to learn with Skoove Premium. Remember, with Skoove Premium you have the opportunity to play along in real time with music and get in-depth feedback on your performance. It is a great way to learn!