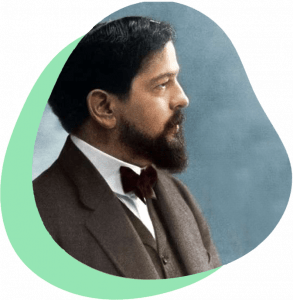 Sign up for a 1 month free trial (no credit card details required) and learn Clair de Lune and other iconic piano pieces with Skoove.

Claude Debussy was a French composer who developed a unique harmonic style, pushing music into the contemporary 20th century style in much the same way that Beethoven pushed classical music into the romantic era.

He wrote for orchestra – perhaps his best known orchestral piece is La Mer, but it is his piano music that is most popular today. “Clair de Lune” is perhaps his most famous piece of piano music and it is the 3rd movement of a suite of 4 pieces under the title “Suite Bergamasque”. He began composing the work around 1890 but fine-tuned it until it was published in 1905.

Clair de Lune was written by the brilliant pianist Claude Debussy and features commonly in many contemporary films, advertisements, plays, and is often even sampled by electronic musicians. The Clair de Lune piano chords are supremely beautiful, and quite difficult to play.

Skoove has created a way to play the Clair de Lune piano chords in such a way that even a beginning pianist can learn to play this incredible song. The complicated time signature changes and triplets have been removed in favor of simpler, easy to read sheet music – so anyone now can play the chords of Clair de Lune.

The majority of established composers around in Debussy’s day were highly critical and resistant to Debussy’s “new” style of music and rejected it. However, Debussy refused to conform to old harmonic rules and eventually his style inspired other French composers like Olivier Messian and Lily Boulanger, and jazz pianists like Bill Evans.