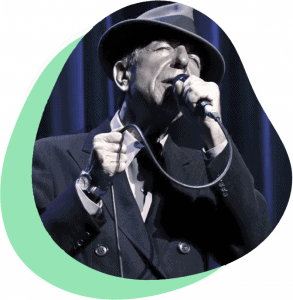 Sign up for a 1 month free trial (no credit card details required) and learn Hallelujah and other iconic piano pieces with Skoove.

“Hallelujah” is a beautiful song which, although it has quite a long history dating back to 1984, struggled to hit high on the charts.

It became more widely known after it featured in the film “Shrek” in 2001 and since then has had around 300 cover versions and been featured in other films and TV shows.
Hallelujah was written in 12/8 time in the key of C major.

The lyrics have constantly changed and evolved over the years, with cover artists choosing to rewrite parts of it. Even Cohen himself struggled to write a definitive lyric, producing something like 80 different versions – and even varying the lyrics between his recording and live performances. It took him around five years to get the song to a point where he could perform it.

Hallelujah is one of the most widely covered songs ever written, lending itself to being played in a multiple of different keys or sung by different voices. Since the song is recognizable, our version doesn’t feature any chords for the left hand and instead everything is played by only using single notes in the melody and in the bass line. Important also to recognize for our version of Hallelujah chords, is that we use a key signature called Gb Major. This key signature can seem intimidating at first because it contains 6 flats (Gb, Ab, Bb, Cb, Db, and Eb), but a better way to think about it is that we focus on playing all black keys, instead of white keys.

Remember these tips and start learning how to play Hallelujah on the piano with Skoove!

The lyrics describe the harmonic structure of the music. “The fourth, the fifth, the minor fall and the major lift”