Boogie Woogie is one of the most iconic and fun styles to learn on the piano. The infectious grooves and syncopated rhythms instantly make you sound like a great pianist and the cohesive and repetitious forms are ripe for improvisation and creativity with just a few easy to learn elements.

The Boogie Woogie style developed in African-American communities in the 1870s and by 1920 and gained popularity in conjunction with ragtime and jazz. The style was the first branch of the blues idiom developed exclusively for the piano and is heavily rooted in the twelve bar blues form and the blues scale.

The Skoove Blues Course shows you the technical secrets of this hallmark style of modern music! In the course you will learn the blues scale, chords, groovy patterns, famous licks, and turnarounds played by the greatest Blues players of history. And, you are going to learn to improvise with six brand new band play-alongs, too! With over 400 lessons waiting for you and a free, 7 day trial you have nothing to lose and a world of creativity to gain!

The only difference between the Minor Pentatonic scale and the Blues scale is the addition of one note, the flat 5th scale degree. The finger pattern is slightly different, so be sure to check out the diagram below to see this new scale notated:

The formula for this new Blues scale is 1 – ♭3 – 4 – ♭5 – ♮5 – ♭7. In vocal styles, the pitch of the flat fifth scale degree is bent up and down for added inflection, expressive power, and emotional impact. However, in tempered pitched instruments with unbending intonation, the flat fifth scale degree cannot be manipulated in the same ways. Check out this Skoove post for more blues scale piano practice.

The Boogie Woogie piano style is heavily rooted in the twelve bar blues form. The twelve bar blues is one of the most prolific musical forms of the last century and has influenced countless styles beyond the blues including rock and roll, country, and funk.

As the name suggests, the twelve bar Blues is twelve measures in length and consists of three chords: I, IV and V. Check out the form below:

This basic pattern follows the 12 bar blues form. Each bass riff begins on the root, moves up to the fifth, then the sixth, then back to fifth. Practice this left hand pattern until you feel comfortable with the motion. The right hand chords can then be substituted for any creative riffing inside the blues scale!

Here is a more developed pattern featuring eighth notes in the left hand. This pattern is on the 12 bar blues form in C as well.

This pattern incorporates double stops in the left hand. Remember, double stops are groups of two notes and are quite common in blues piano playing. This example follows an eighth note pattern and begins with fifths in the left hand, moves to major sixths, then minor sevenths, then back to major sixths. This is a powerful boogie woogie rhythm pattern that will get you going quick!

Once you feel comfortable with this left hand rhythm pattern, try adding some variation in the right hand chords like this: 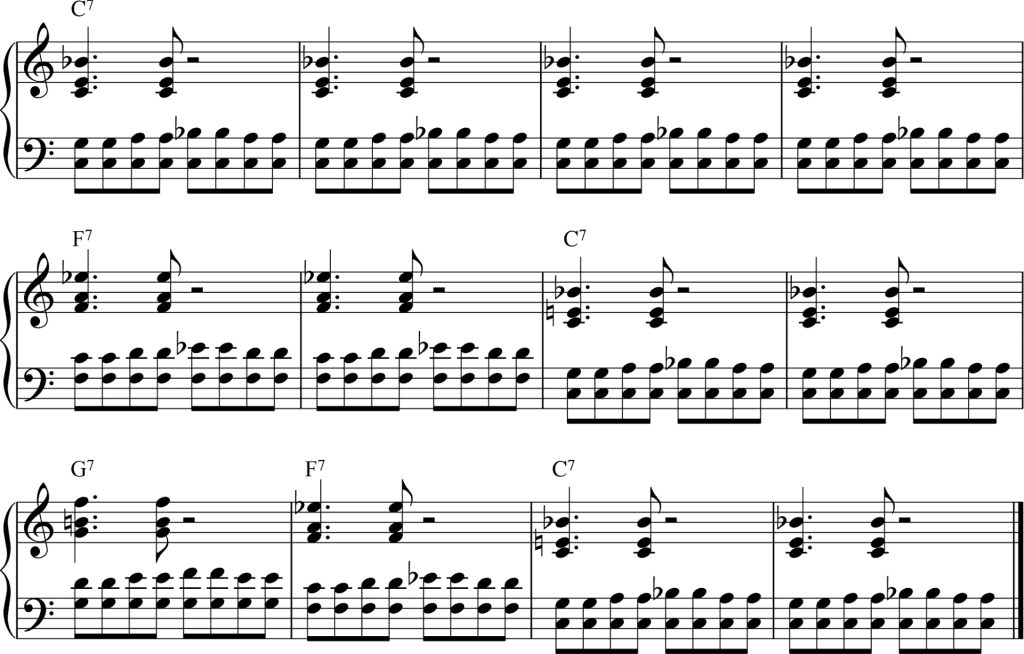 This example uses the same eighth note pattern from the previous example, but adds a syncopated chord rhythm in the right hand. The right hand pattern consists of a dotted quarter to eight note rhythm, which gives the example of light and buoyed feeling of forward motion, exemplary of the boogie woogie piano style.

Here is one more example of a more developed left hand pattern that builds on the same idea from the previous example: 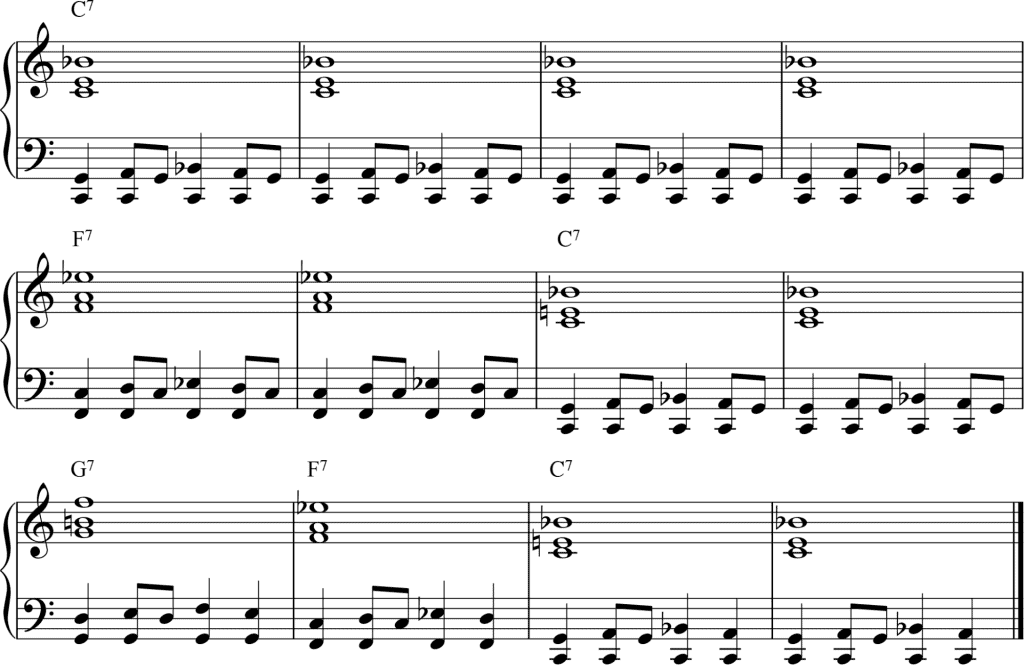 This example blends together eighth notes and quarter notes into a groovy, rolling pattern with a lot of forward momentum. The pattern is based on the fifth to sixth to minor seventh motive from the previous eighth note pattern.

Now practice combining all four of these boogie woogie piano patterns together into a cohesive improvisation! Remember, the root of this style is very improvisational. Yes there are forms and elements to play with and great examples of recordings to learn from, but the experience of playing it and stringing together and developing ideas from riffs is the key to progressing here!

Are interested in learning more about the history and development of boogie woogie piano playing? Originally, boogie woogie was party music. It was a dance style that was played at house parties and other social gatherings. Remember this when you are practicing!

Albert Ammons was a phenomenal early boogie woogie pianist. Ammons was active in the first half of the 20th century in Chicago and New York and was a steady performer and recording artist in the genre. He performed in 1938 at the famous Carnegie Hall in New York and later recorded some of the first tracks for the young Blue Note Records.

Gene Rodgers is another excellent example of boogie woogie piano playing. Pay close attention to the insanely strong rhythm played in his left hand. This recording is fast and Rodgers really holds it down and drives the whole band with his left hand. It is truly incredible to listen to and should provide ample inspiration for your boogie woogie adventures!

Jerry Lee Lewis is another iconic performer of boogie woogie piano. He is most famous for his boogie hit “Great Balls of Fire” and was undoubtedly influenced by both Ammons and Rodgers. Here is a recording of his tune “Boogie Woogie Country Man.”

Listen to the strong eighth note feeling in Lewis’s left hand in this recording. Also, pay attention to the stops or breaks in the performance. These stops are a sure way to build tension and forward momentum in the music. Listen to this recording to get a feel for how they work and try incorporating them into your own boogie explorations!

Boogie woogie is a fun and infectious piano style. It is heavily rooted in the blues scale and 12 bar blues form and is full of space for creativity and riffing. Learn these basic elements including the blues scale, blues form, and these four basic boogie woogie piano patterns and then practice weaving them all together into your own creations! Remember, the style originally was played at parties, dances, and other social gatherings so try to keep this jovial and fun mood in your playing! Check out these recordings for additional references and remember that Skoove is available to download for free from the Apple App store for iOS or from the Google Play Store for Android worldwide in English and German. Beginners, refreshers, and intermediate players can try it out with free lessons and then upgrade to Skoove Premium to enjoy full access, one-on-one learning support, and exclusive content with new lessons and music theory tips!

Try out your free trial of Skoove today!