Chords are the bedrock of most of the music we listen to today. They can convey specific emotions, give a sense of structure or direction to a piece of music, or simply color a given tune.

Like most things in music, however, this is largely dependent on context. In other words, the effect that a particular chord has within a song depends more on what happens before and after the chord, and less on the chord itself. We refer to this context as a chord progression, which happens to be the main topic of this article.

What are chord progressions?

Before we continue, let’s recall that a chord is simply a collection of pitches — usually between 3 and 5 — that, when played simultaneously, act as a harmonic unit. For instance, the pitches C, E, and G, form together the C major chord. If you’re feeling rusty on piano chords, however, feel free to read this article first, and then come back for more.

To start, we can define a chord progression (also called harmonic progression) as a sequence of chords, ordered one after another. Notice that order is important here since, as was mentioned earlier, the effect that a chord can have depends largely on what happens before and after it appears. Consider, for instance, the following chord progression

How do chord progressions work?

How do progressions work? Well, while an in-depth explanation is far beyond the scope of this article, let’s take a look at some of the key concepts. Consider the following two examples:

All available triads in C major

All available triads in G major

Above, are all the triads available within the C major and G major keys, respectively. Notice that, although the chord names shown at the bottom of each graph are different for each key, the labels shown at the top are the same: The first chord in both keys is I, the second one ii, the third one iii, and so on. These labels, also known as roman numerals, are an alternative and convenient way of notating chords, because they tell us how chords relate to each other regardless of which key the progression is in. Before we delve deeper, here are some of the most important things to keep in mind about roman numeral notation:

All available triads in A harmonic minor piano scale

In the key of A minor, the F major would be notated as bVI. This is because, in A major, the sixth chord would be F# minor (labeled as vi), so bVI tells us that F major is a major chord, and its root is a half step lower than it would be in a major key.

Although roman numeral notation might understandably seem difficult or confusing at the beginning, it’s an extremely useful tool and will allow you to more easily recognize and gain a deeper understanding of piano chord progressions, regardless of the key they’re in!

Now, coming back to the topic of tension and release, let’s dig deeper. In most western music, specifically in tonal music, chords can play one of three roles: tonic, pre-dominant, or dominant.

To keep things less abstract, here’s a cheat sheet for both major and minor keys: 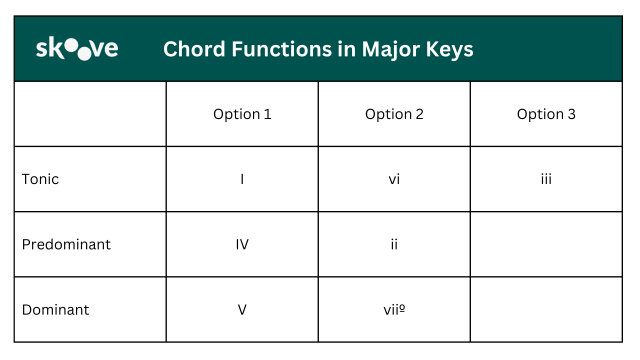 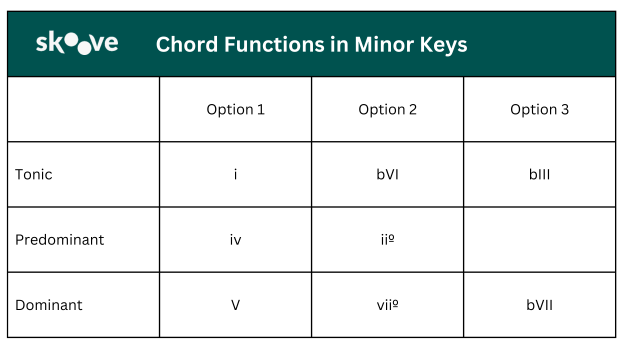 As you can see, each chord is notated in roman numerals to show that these rules apply regardless of which key we’re in. For each role or function (i.e., tonic, pre-dominant, or dominant) there are 2 to 3 options, in order of preference. For instance, in a major key, I is a stronger tonic than vi, and vi is stronger tonic than iii.

Now, if this still seems too abstract or complex, don’t worry! you’ll soon be able to use this to create your own chord progressions and, eventually, your own songs!

To quickly get used to playing chord progressions on piano, we recommend the following steps:

Now try these steps with the following progression, notated in roman numerals:

Notice that these are just a few out of many possible versions of these progressions. You might have chosen a different register for each chord, but the progression itself is still the same!

Now it’s time to look at some of the most common chord progressions, which you can incorporate into your daily piano practice.

How to write and play common chord progressions

A great way to practice common chord progressions, is to play them in different keys. Here’s a step-by-step guide on how to do it:

How to read and understand chord symbols

So far we’ve been focusing on reading roman numerals, but let’s take a moment to better understand how to read chord symbols. This is by far the easiest and simplest one of the two.

When reading chord symbols, pay attention to the following features:

Take for instance, this progression in Michael Jackson’s Heal the world, available as a lesson through the Skoove app:

Not all chord progressions are created equal — some are more ubiquitous than others, and not only come up more often in music but can sometimes be strongly associated with specific popular music styles or genres, like rock music. Let’s take a look at some of them.

Although this progression is extensively used in many kinds of music, it’s most commonly associated with jazz harmony. Try playing it these two version and see if it reminds you of any song:

The 12-bar blues is another, perhaps even more, recognizable progression.  This progression was particularly popular during the 50’s, but still crops up in all styles of music.  Some of the many well known songs that use this pattern are: Rock and Roll Music by The Beatles, Still Haven’t Found What I’m Looking For by U2, and Hound Dog by Elvis Presley. Feel free to play it yourself:

This progression is also featured in plenty of songs, including pop music hits like Taylor Swift’s Clean or Aerosmith’s Cryin’. Give it a try and see if it brings any other pop songs to mind.

Also known as the 50s progression, this chord progression is used by Elton John in Crocodile Rock, as well as by Avril Lavigne in Complicated. Try it yourself!

This progression is most common to find in Classic Rock. Different from the previous progressions, this one has what we call a ‘borrowed’ chord. This simply means that, even though it’s a major key progression, we find the bVII chord, which is being ‘borrowed’ from the minor key. Popular examples of this include the final section of Hey Jude by The Beatles, or the verse in Guns N’ Roses’ Sweet Child O’ Mine.

Although this progression is sometimes associated with Johann Pachelbel’s Canon in D, it’s one of the most common chord progression in popular music as well. Some relatively recent examples include Maroon 5’s song Memories, Belle and Sebastian’s Get me away from here I’m dying. If you’re in the mood for some musical comedy, make sure to check this old viral rant about Pachelbel’s canon:

Chord progressions can convey many emotional characteristics and associations. One of the most well known progressions is the I–vi–IV–V progression, characterized by its bright and upbeat character, which may be commonly associated with happiness. Try playing it at the piano:

This progression is everywhere in music, from 1950’s doo-wop styles to contemporary pop and rock tunes.  It also happens to be used in Eric Idle’s Always Look on the Bright Side of Life, which you can learn through the Skoove app.

The type of emotion that piece of music conveys is highly subjective and dependent on many factors, including the listener’s life experiences, mood, culture, etc. This is especially the case when trying to pin down what makes a chord progression ‘sad’.

For instance, although major keys tend to be associated with happiness and minor keys with sadness, this is by no means an absolute. One clear example of this is Radiohead’s No surprises, a rather depressing song written in a major key. Here’s the progression of the verse:

Chord progression from Radiohead’s No surprises

Progressions like this brings us back to the initial point of the article: Music is all about context! In this case, the slow tempo, gloomy lyrics, and lullaby-like character of the song subvert the usual assumption of “major key equals happy”.

In this article we looked at different chord progressions, what they are, how they work, and helpful tips for writing, reading, and playing them on the piano. Although it’s certainly a challenging topic to understand, knowing how to write chord progressions is a highly rewarding skill!

Now that you’ve come this far, all you need to know is get in the habit of practicing them by incorporating your favorite chord progressions into your routine. Once you feel more comfortable, try working your way through the Chords & Scales course. This will help you expand your music knowledge, and teach you other common chord progressions. Get creative with them and acquire the skills to accompany hundreds of songs. Happy playing and until next time! 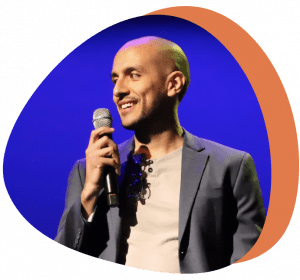 Felipe Tovar-Henao is a Colombian composer, developer, and researcher, whose work focuses on algorithmic creativity, sound perception, memory, and recognition. His music has been performed and commissioned by international artists and ensembles such as Alarm Will Sound, Grossman Ensemble, Sound Icon, NEXUS Chamber Music, and Quatuor Diotima, and featured in many festivals around the world, including WOCMAT (Taiwan), SICMF (South Korea), SEAMUS and SCI (US). He’s currently based in Medellín, Colombia, where he’s Professor of Music theory at EAFIT University.