The more time you spend around musicians, the more words you will hear that have only to do with music. A very common term said by musicians is “major scale”. Major scales are incredibly common, and are one of the first steps to learning about music in a sophisticated way. Scales related to music of all kinds and styles. We’re going to investigate another in our beginner’s guide today: The F major scale.

What is the F major scale? This is our first step into complicated music because we are leaving the comfort of the C major scale and only using white keys. We instead are now moving into the first key with a flat in it. Don’t forget about your scale degrees! Our first scale degree that  flat is Bb. Bb is the note just below B, moving from a half step below. Look at our piano diagram: 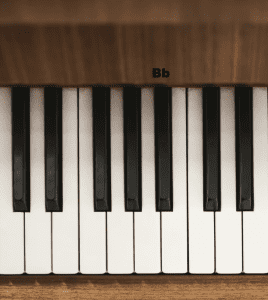 Why is it that we need to use a Bb note here, instead of a B natural, like in our C major scale? It is because every major scale uses the exact same pattern of whole steps and half steps. That relationship is very important to remember:

So a major scale starting on F needs to use one black key in order to keep the same pattern as our C major scale. This can be complicated at first, but what you have to do is very simple. Find your root note, then apply the pattern. Follow the note names alphabetically, and play all the piano scales notes according to our pattern.

What notes are in the F major scale?

This is simple, but unlike our C major scale and our chromatic scale that is only white tones, we are now using a flat symbol, and playing our Bb. Here is how our music looks like on the grand-staff that a piano uses. Remember that the intervals between the notes are exactly the same as they are in C major, we have just changed our root notes.

The first note we look for is F, and each hand will play the same notes. Sometimes our key signature will be changed to show the flat note in the key signature, but we are going to leave the key as C natural, and write the flats in the measure instead.

The scale as it is written on the treble clef example looks like this: 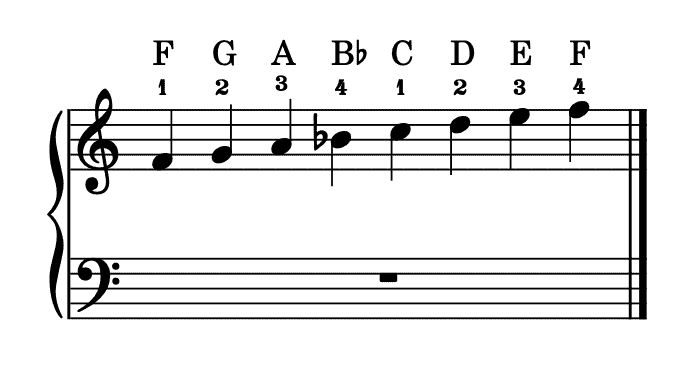 This is to account for the fact that if we were to use our normal 1-2-3, 1 pattern, our thumb would have to land on the black key a step higher than A, which is called Bb. This is simply impossible and impractical to play on the piano. For this reason we move to play the fourth finger on Bb, then we swing our right hand thumb under to play the note C.

Our notes are exactly the same as the right hand, except written on the bass clef. Our note names are as follows:

Practicing hands together with a contrasting scale exercise

One of the best ways to practice F major scale piano finger independence is by learning to play scales with both hands. Unfortunately, because playing scales are challenging for students, we typically play them one note at a time. However, once a student has independence, we can then add both hands playing at the same time. 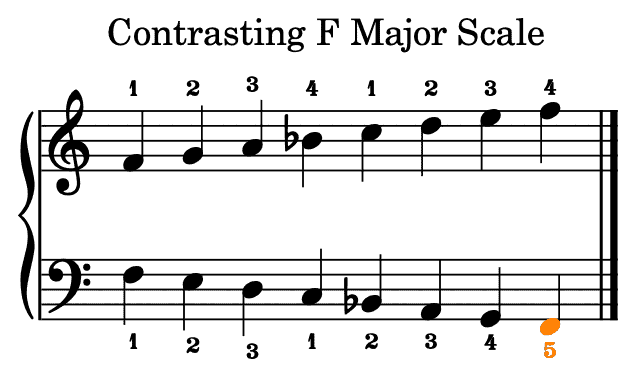 Notice that unlike our typical scale patterns, because we have a Bb here, the left hand and right hand do not mirror each other like in other scale patterns. Do not be intimidated by this detail. The differences make these scales easier to remember, they will help you become a better pianist.

The F major pentatonic scale is incredibly useful to know how to play. It is a scale pattern that can easily be played over a number of different chord progressions, in lots of situations, and can be used to improvise with your friends or solo! 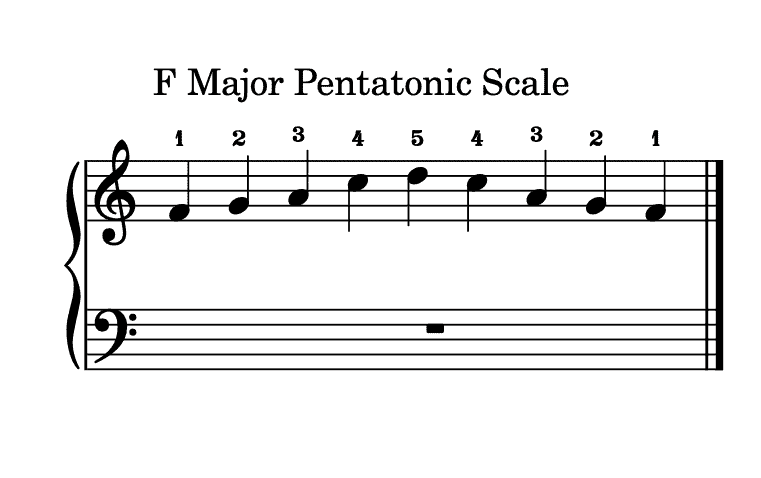