Learning chords is the first step to truly understanding how to play the piano, and approaching different types of music as a pianist. With pure understanding and chord knowledge, the entire world of music playing and music making will open as you learn your different major chords, and apply them to your relative and understood major chords. This example is all about the major and minor chords in the major key of G major. We focus entirely on the G major triad, which is the first chord in the key of G. It also has three inversions which will be covered below. This is a very popular key, and a very common chord shape that falls into many major key signatures. The major key signature of G includes both minor and major chords of course, but first we will only be talking about the G major chord.

What is the G major chord?

This chord is often the first chord learned by people who play lute based instruments, such as the ukulele, guitar, mandolin or bass, because it requires only a few fingers to play them and mostly open strings to strum. On piano however, we learn this chord almost always after learning to play the C major chord, which is overwhelmingly the most common chord to play on the instrument, and the most common key signature to play on the instrument. The reason for this is that both the chord C major and the key C major have no sharps or flats in either position or in the scale, so this allows even the most beginners of players to make beautiful sounds with their instrument, even using only the first finger, third finger, and the fifth finger.

How do you play a G major chord on piano?

The most common way for G major to be played is by using the root position chord inversion, and three fingers. We first place the thumb of the right hand on the lowest note, the root note, G, then the middle finger on the note B, then the pinky finger of the right hand on the note D. These notes when played all simultaneously or separated make up the notes in the chord called G major. This chord also appears in the key of C major, and the key of D major.

Notes in a G major chord

The notes in the G major chord are called this way because they are spelled using notes in alphabetical order, that are thirds away. This is just the way that chords are spelled, and it is easier to understand this is how chords work than to ask why.

The notes that we use because they are being split by thirds, we use every other alphabetical letter – which we think of as G, B, and D. Because the notes are split this way, it is easy for us to always know that every time we see the chord G major, this is what will we be expected to be playing. The scale associated with this chord is not important right now, and because of the amount of notes that we have in sheet music, we actually can find the chord G major in three different keys, so don’t worry about exactly what scale you are playing or what key you are in. Start playing the notes in a G major chord, and as the song asks for more complexity, you can add more complexity.

Because the notes in the G major chord on piano only contain three tones, we call it a triad. The three notes are being played in this chord, it is often called a triad. This is also because the notes of the chord are spelled in alphabetical thirds, this means that we use every other letter, and that the notes are going to be separated by a major or minor third. This is always true for chords in root position, but not always true for chords when they are being played in inversions. An inversion is when we take a similar chord shape and we turn it.

Though the chord named G major and G major seventh have many of the same words in common, they are actually functionally very different chords. Even though the center notes b are the same in both of them, and that they both are spelled from the note G, it does not make them compatible or comparable in every situation. The G major 7 chord is most often used in jazz music, or in typically ethereal sounding classical music. The G major 7th chord uses the key F# in addition to the bass note G. This is different than a g major dominant 7th chord.

The reason why this is not so commonly used in rock or popular music is because the half step between F# and G happens to sound very dissonant and off-putting to some audience members, so often it is left out of chords played on popular music. It also is not one of the chords in the key of C, so it is also left out, and if you were to play a G major 7th chord when you saw a G major while playing in the key of C, it would be very off-putting and incorrect, because the key of C has no F# natural to it.  Some G major chord progressions do often include the major 7th chord, but not all.

The finger position used to play the chord G major will change if you’re playing the chord with your left or right hand, or if you’re playing it with two hands or with a single hand. Simply put, chords can be variable. However, here are the most common fingerings for the triad G major, written for both hands, and including the inversions.

The fingerings for both of these chords are written here, along with the inversions. If you cannot read the sheet music, below there is also a chart written so that you can understand it using only notes and fingerings.

Here is the sheet music representing the left and right hand for all three inversions of G major. If this cannot be read, below you will find also all of the chords represented in grid for, corresponding for each fingering. These diagrams in sheet music contain each of the inversions, root position, first inversion and second inversion, written for both right and left hand. The right hand is intended to be played with the notes written on the treble clef, whereas the chords written on the bass clef are intended to be played with the left hand. The fingerings have been adjusted in both situations to make sure that they will work, the fingerings are different for each hand. 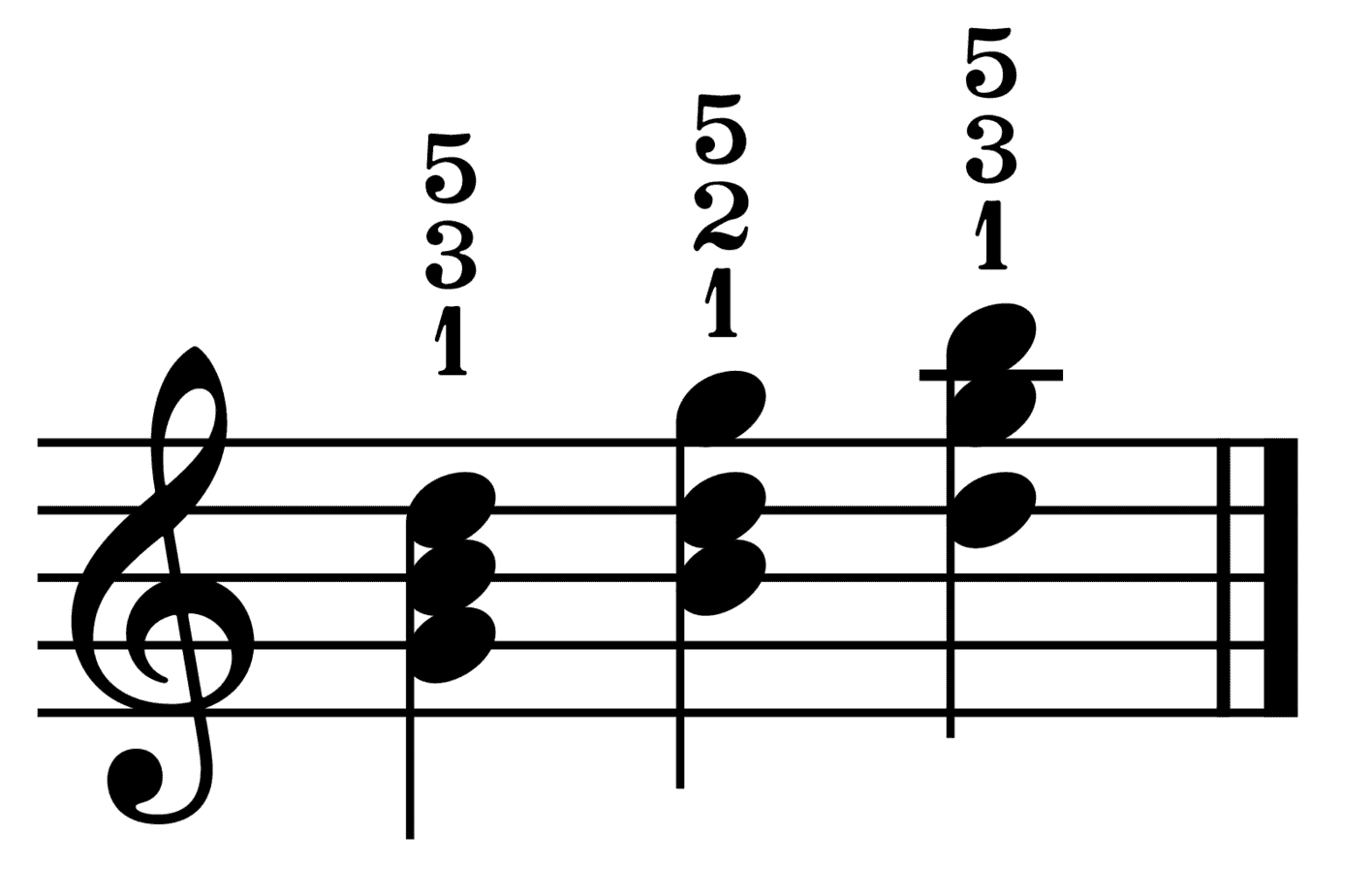 The simplest way to think about how inversions work is by comparing a chord to a triangle, or to a basic geometric shape with three sides. Once you can imagine that we are using a shape, we can then imagine that all three sides have a label. Once we have a shape set, we can imagine that we take that same shape and rotate it, allowing each side to be on the bottom most. This is the way that musicians use and think about inversions, we take the shape and by rotating the chord, since the notes are the exact same for each of the shapes, even though the lowest note is not the root, the chord still maintains its identity. So, our first inversion now has our root on the top of the chord, instead of on the bottom of the chord, as was placed earlier.

Chord inversions are when we take the chord shape or triad and rotate it, but when they are expressed in sheet music or on a chord chart we often will see a different symbol. The symbol we see will be the name of the chord, indication of whether it is major or minor, and then a separate note written underneath in order to express whether it is written in first inversion or second inversion. These are common in a G major chord progression piano.

However, unless you are playing extremely old classical music, the inversions will not be written out indicating which inversion it is written in, instead it will be written that the lowest tone will be a note inside the chord. It is up to you to learn to recognize whether the note underneath the inversion is indicating if the chord is in first inversion or second inversion, but it will very rarely be indicated by the chords in the key. Often a G major chord progression piano written in music notation can be vague and you will be expected to understand how to play all of the inversions whenever you are needed to play them.

Second inversion is for when the 5th of the chord, is placed on the bottom and the top of the chord is occupied by the third. This inversion is called second inversion, because it continues the rotation as expressed by the first inversion. This is often considered the strongest of the inversions because the fifth below the root creates a very full and rich sound, that is powerful and strong.

Popular songs to play with a G major chord

As the G major chord piano is the most common chord next to C major, many songs can be expected to contain this, not just songs that are in the key of G. Many of them also share the same chord progressions in G major. You can expect to play this chord a lot with any song that is in the key of C, or in the key of G. The chords of G major are:

The Beatles – Let It Be

Queen – We Are The Champions

This stomping rock song is a great way to learn common chord progressions that include the G major piano chord, because it introduces the common blues chord progression of C, F and G major chords piano. This is found all throughout rock music and blues music, and is something you can learn to play and it will have an incredible improvement on all your work going forward.

The most famous piano pop song perhaps of all time, Piano Man, of course uses the simplistic chord progression and combines the G major chord progression masterfully. This song is also challenging because of the time signature, so watch out and make sure you’re playing it closely with Skoove’s built in metronome.

Skoove’s most useful feature is being able to give you a huge library of songs that you can apply any skill you’re learning to. In this case, the free trial will be able to get you up and running, and practicing your new G major chord notes and G major chord inversions quicker and easier than ever. Practicing your chords will pay dividends as your playing expands into new territory, you’ll be sure you can play anything you can think of by using the skills learned from lessons like this one!