Harmony is a vital part of any piece of music. The simplest definition of harmony in music is that harmony consists of chords that complement a melody, giving it musical context and emotional value.  Chords and harmony are the same thing.  It’s worth taking the time to learn about them and practice playing chords as you can very quickly progress on the piano and learn to play your favorite songs using chords.

Look at a scale of C major:

The scale is made up of seven consecutive notes.  Each of the piano intervals are tones or semitones.  The scale has three important notes that, when played together, form a chord – in this case, a C major triad.  Because these notes sound good together, these create harmony in music.  Those important notes are the scale degree: 1, 3 and 5.  These notes form a basic 3-note chord or “triad”.

How harmony is represented in music

Harmony can be written on a single staff or over multiple staffs, depending on how many voices or instruments there are.  Harmony can be close, meaning that the notes are usually in the same octave, or open, meaning the notes can be spread over a large range.

The fundamental sound of harmony is major and minor.  Major sounds happy while minor sounds sad.  What makes this huge difference in tonality is the third note of the scale.  If you play middle C and play the E above it, you’ll hear a major third.  Then try flattening the E and you’ll hear a minor third.

You can learn more about the interval of a major or minor third with Skoove’s beginner piano lessons while you learn to play a selection of great songs!

Example of harmony in music

To create harmony to support a melody, a songwriter will often choose a chord that includes the same note as the melody.  This gives them a choice of chords – major or minor.  Let’s take a simple melody as an example.

The melody begins with E in the right hand.  The note E occurs in the chord of C major, A minor and E major.  In this case I’ve gone with a C major chord (C, E and G).  That will be the harmony for all the notes in that measure.  In the second measure, the right hand plays an A.  The note A occurs in A minor and major, D minor and major, as well as F major.  In this case, I’ve chosen a D minor chord.

If you’re familiar with basic piano chords already, try playing those two measures on your keyboard and listen to the harmony they create.  The first chord is a major, so it sounds happy to start with, then it moves to a minor chord which sounds a little bit sad. 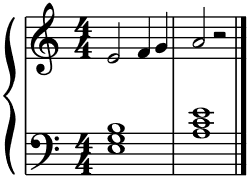 Moving from one chord to another is called a chord progression.  It’s a really good idea to become familiar with all the basic three-note chords when you’re starting to learn the piano.  It makes getting around the piano much faster, plus, you can harmonize a melody right away and sound like a pro very quickly.

To create harmony, first you have to be in a “key”.  For instance you could be in the key of C major.  If you think back to the C major scale and the most important three notes mentioned earlier, the first note of the scale is called the tonic and the fifth note of the scale is called the dominant.  Try playing these important notes by playing different scales on your piano keys.

The tonic is the strongest note in the scale as it begins and ends the scale.  The chord that sits on the tonic sounds very strong.  The tonic is “home” and almost all pieces of western music will end on a tonic chord.  Both C major and C minor have C as their tonic.  However, A minor, which shares the same key signature as C major has A as its tonic as that is the note the scale begins on.

You might see a chord written with a “7” after the letter, for instance “A7”.  This means to play a  “dominant 7th” chord.  In this case the 7th note of the scale is added as a flat.  So for instance in in C major, we would add a flattened B.  This gives you the sound of “going somewhere else” and is often used to take a song from one section into another.  This 7th is usually just referred to as a “7th” without using the word “dominant”.

In some music harmony you might hear a note that really doesn’t belong in the chord.  This will produce a “dissonant chord” meaning that it won’t sit very comfortably on the ear.  It isn’t wrong to do this – there are many times when we need to create tension in music, and using a dissonant chord is a good way to do this.

Like consonance and dissonance, we label certain types of harmony as diatonic, non-diatonic and atonal.

Diatonic harmony simply means that all the notes in the chord or chords are related to each other, just like the C major chord or the G minor chord are found within the scales of the same name.  So it’s another way of saying that the harmony is consonant.

Atonal harmony is music that isn’t written in a key.  The notes are written as if unrelated to each other.  This type of music came into fashion around 1907 and was made popular and acceptable initially by Arnold Schoenberg who invented “12-tone” writing, rather than writing in a key.

What is implied harmony?

If you listen to someone sing a melody, one note at a time, perhaps somewhere in the back of your mind you can sense the harmonic context of the tune.  If you’re an experienced musician you almost certainly will.

When we hear one note followed by another, our brains combine them to try to make sense of them.  For instance, if someone sings the note E followed by a G sharp, we will automatically perceive an E major chord because those two notes make up two of the three notes in that chord.  Whether or not you can name it, your brain is searching for harmony that is implied.

Of course the notes E and G sharp both belong to other chords too, so there are multiple ways those two notes can be harmonized.  However, in the absence of any supporting harmony, we have to get by with implied harmony. This can equally apply to someone looking at an unharmonized melody on paper.

Four part harmony is music written for four voices.  These can be actual human voices, a whole choir, or other instruments such as four woodwinds or any combination that you can think of. 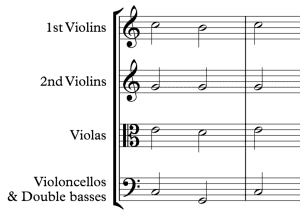 How to write four part harmony

Writing four part harmony involves taking a chord progression and dividing the notes of the chord among the four parts.  The four voices will each have a different range.  Typically voices are arranged for soprano, Alto, Tenor and Bass (shortened to SATB).

While this seems fairly straight forward, there are numerous things to consider.  For instance, which voice will have the melody at any given time.  Will the melody switch between voices.  Will it be written in close harmony or open harmony.  Four part harmony can be written on two staves with the soprano and alto on the top staff and the tenor and bass on the bottom staff.  Or it can be written on four staves.  This is often the better choice as it can be much clearer and easier to read.

If you are a beginner or intermediate player, you don’t have to know a great deal of music theory, but see what you can recognize when you’re listening to music.

Try using the best piano app to learn more about harmony and music theory while increasing your ability to play your favorite songs!

Get 30% off Skoove's piano lessons