Jazz piano chords are some of the most complex sounds that a piano can make. Knowing some common jazz chord shapes, minor seventh chords and dominant chords can really add a lot of shape to your playing. Learning how to make jazz chords is not as difficult or complex as it might seem, and with some basic formulas you can get going fast. Try to avoid using a jazz chord chart, as you want to be able to use any of these based on your knowledge, a bass note, and a chord shape.

What are jazz piano chords?

Often even just the word ‘jazz’ can instill fear in piano students due to the genre being largely synonymous with complexity and virtuosity. Whilst a lot of jazz music is indeed complex and many of the musicians who play it are of extraordinary ability, many jazz pieces are composed of the same fundamental chords and chord progressions with variations in regard to key, modulation, tempo and structure.

What follows is a step by step breakdown of what a jazz chord is, how jazz chords are constructed, how to read jazz chord symbols, common jazz chord progressions and several practice tips along the way.  By the end of reading this blog, you should have the tools and knowledge to begin learning and experimenting with jazz chords in your piano playing.

In order to get a jazz sound, what jazz musicians need to do is to learn a little bit of chord theory before they play jazz. We build on all of our basic chords, our major chords, minor, dominant and diminished chords, but to really start playing jazz we have to learn about other chords. Chords that use jazz harmony, lead sheets, chord types, and a little bit of music theory. Don’t worry, we will learn all of our chord types by looking at a chord symbol found in lead sheets, and look for songs that use the same progression. All jazz musicians do learn this way, so don’t be intimidated, and try not to rely on chord diagrams. Look for patterns of common chord progression, and pay attention to each chord type.

An extension is when we add to an already existing structure. In this instance, we are adding to a chord. As a musician of any instrument, extensions are probably easiest to understand when they are explained using a piano due to the piano’s inherent linear sequential structure. For this reason, brass and woodwind instrumentalists often learn harmony and arranging using the piano as a visual and tactile guide.

The fundamental extension to any triad is the seventh, however because this is so fundamental, it doesn’t fall under the umbrella of what we refer to as extensions in the context of jazz. It’s what we add in addition to the seventh which we refer to as extensions and these influence the colour of the chord and subsequently, mood of the music. We can add extensions to any seventh chord, provided it does not clash with the melody.

An important point to note is that sevenths do not always feature in jazz chords (for example sus chords), however they do feature in the large majority of them which is why we will start from this point.

If you take a look below, you can see the chord tones numbered from 1-13.

Another common type of chord to play when playing jazz music is to play a chord built off the same notes as a major chord, but instead of a major chord having a typical major third, we will use a perfect forth above the root note. This makes our chord not appear in the major scale, but these chord voicings are called suspended chords. They are different from major triads because their third is not the same as a typical chord. They are an important part of learning jazz, and use the same notes and root note as many other types of seventh chords. Jazz theory is all about being able to understand these concepts and play them quickly.

A typical Csus chord is spelled C, F, G, where the E has been raised up a half step, similar to how diminished chords have the fifth lowered a half step. All complex music concepts are actually just extra alterations of common types of music, generally the first chord shape that you learn, but then they change just a little.

In most piano chord progressions, like the examples given above, chords are mainly voiced in 3rds in order for you to see the relationships of the extensions clearly.  It is helpful when beginning to learn about jazz chords piano, to see them constructed in this way. Autumn Leaves is one of the top piano covers to learn.

When we have understood how to build our chord in 3rds, we can invert and separate the notes out into the right and left hand, not simply because we are limited by five digits on each hand, but because playing different inversions of the piano jazz chords will produce different sounds, be more appropriate and make for smoother, more pleasing and interesting harmonic progression.

As a rule of thumb when voicing ii V I chords for solo piano, always play the root of the chord as the lowest note in your left hand and be sure to include the 3rd and the 7th as part of the chord.  The 5th can be included or omitted depending on the sound you are wanting to create.

If we take the opening of Autumn Leaves again and this time, move away from using 3rds, we could voice the chords like this: 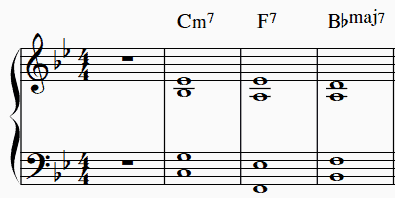 The right hand chord changes above are smooth now rather than in a block-like fashion?  This is what we are aiming towards when we voice our jazz chords.  If we go a little further now and add in some extensions, it may look something like this:

Try playing along to the first four bars of Autumn Leaves in Skoove using the above chords as accompaniment.

Like anything, if you wish to improve, practice plays an invaluable part of the picture.

The most valuable form of practice after you have gained some insight into theory is to practice jazz blues chords in the context of a piece of music.

A great place to learn to play is the jazz classic, Blue Moon. Jazz and classical piano are closer than you think. It is a worthwhile exercise to play chords individually and cycle ii-V-I progressions in order to familiarize oneself, or to play it over a walking bass,, but that is only part of the process.  The last and most important part is to apply what you have learned to a piece of music.

A jazz standard you can do this with is Georgia On My Mind, and Skoove takes you through this classic song.

Learning jazz from the pros

Much like a child learns how to say words by listening to them and trying to mimic, before even learning how to spell or read. Listening to jazz music is a great organic way of familiarizing yourself with jazz chords, chord progressions and harmonies. Pianists such as Herbie Hancock, Bill Evans, McCoy Tyner, Wynton Kelly and Thelonius Monk are just a handful of musicians you should listen to. Another way to learn how to play major jazz chords, jazz music and interesting music is to try out the piano app, Skoove. Sign up for a 7-day free trial and add all the complex jazz chords to your playing today!