In this article you will learn to identify major and minor chords, to understand their relationship to key centers, to use them to enhance your interpretations of your favorite songs, and to put them to work to develop your improvising and grow your repertoire.

A Brief History of Tonality

Tonality is the word used to describe the organization of pitches (notes) in order of importance in relation to a fundamental. The word ‘fundamental’ is not used very often beyond music theorists. However, you may be familiar with the word ‘key note’ or ‘tonic’ which means the same.It may surprise you to know that music has not always been organized in the major-minor tonality. In Western music the tonality before the 17th Century was modal. The musical modes have not completely disappeared, in fact they are used in some of the most well-known songs. The major – minor tonality gets its name from the major and minor scale degrees which it is based on. However, even this familiar system has slowly been dismantled as composers from the 1880s onwards have experimented with increasingly chromatic and atonal writing. For example Debussy who used the whole tone scale.

Back to Major – Minor Tonality

In order to understand major and minor chords and how they are used in melodies it is useful to know a bit about keys. Music is organized into 12 major and 12 minor keys. Each major key has a minor key that it is ‘related’ to. They are related because they consist of the same notes. For example, the key of C major is related to the key of A minor.

The key of C major:

The key of A minor:

Play these scales and listen to the different sounds and atmospheres created simply by starting on a different note in the sequence. The key of C major has a much different feeling than the key of A minor.

Now we are moving on to creating chords out of scale notes.

Chords can be built on any note of the scale. They are built on piano intervals known as skips which means that in C major scale you can build a chord of C by:

Go and play these notes on piano, C, E, G. You have now played a C major chord. However, that is not the only chord that you can make in the C major scale. By repeating the same process on every note of the scale you can also make:

Time for some more playing, using Heal the World you can learn C major chord (C), D minor chord (Dm), and E minor chord (Em). These are the first three chords of the C major scale. The Skoove piano learning app will listen and wait for you so take your time to appreciate the different sounds of the major and minor chords.

There are three ways of identifying major and minor chords.

Recognising the tonality from the sound of the chord

This is a very intuitive approach. The major chord is often described as brighter and the minor chord as darker. Similarly, a major key feels more optimistic and a minor key more troubled.

I have chosen one of my favourite composers and pieces to share with you. It exemplifies the power of juxtaposing major and minor. In this example you can also practice your recognition of major and minor in piano chord progressions. Schubert often uses the technique of moving from major to minor and back to major to bring a sense of pathos, tension and story telling to his music.

Listen to this Schubert Impromptu Number 2, D935. At 1 minute 30 seconds the ‘middle section’ begins. Can you hear when the tonality changes? Take note of the time in the video, I have written the answer at the end of the article.

Recognising the tonality from the intervals used in the chord

This method is grounded in theory and through simply counting the semi-tones between the notes of a chord you can work out if it is major or minor. Many people use this as a way of checking their ear has identified the tonality correctly.

What you need to know

Starting from C, move 3 semi-tone steps and you will land on E flat. This shows you are looking at a minor chord because a minor 3rd is 3 semitones. The last note is G, starting from E flat, move 4 semi-tone steps and land on G.You can use this to work out the tonality of any chord you play providing it is in root position. You know a chord is in root position when it follows the pattern:

Recognising the tonality from the chord symbols on the music

This method is based on understanding chord notation as it is written in a lead sheet or in pop music. These are the basics which you can build on over time.

Difference between major and minor chords

But what is the theoretical difference between major and minor chords? We have touched upon it a little bit.

It really is not any more complicated than that. You can also see here that major and minor chords are inverse of one another – a very simple way to remember the difference!

Making Chords Work for You

Chords can be used to develop your playing in many different ways.

Use chords to develop your technique

Having established that Western music is built on the major-minor tonality it is clear to see how the more familiar pianists become with major and minor chords the better they will be able to play. Chords are core stock to pianists.  Practicing piano chords will develop technique as well as chord recognition.

Use this progression from Unchained Melody to develop your technique. Keep your fingertips firm, your fingers rounded and your wrist free as you sink into and float out of these chords. The Skoove app will listen and wait for you.

Use chords to grow your repertoire

If you do not know about 4-chord songs here is a fun introduction:

Learn these 4-chords to play all those songs:

Use chords to improve note reading through pattern recognition

When you see chords in your music, use this top tip for reading them. Train your eyes to read the bottom note first and then use pattern recognition to read the other notes. It is not necessary to read and recognise the name of each note. Rather focus on identifying the interval between the notes and feeling what it is like to play.

Use chords to improvise

Improvising on a chord sequence is a great way to begin exploring the creative and fulfilling skill. This is because the framework of a powerful chord sequence holds your playing. Try it out now with this sequence in the left hand:

The right hand can pick out a melody. If you are new to this, start with long melody notes.

Use chords to enhance interpretation

Use chords to develop your listening skills

The more you practice listening for and identifying chords the quicker your listening skills and your ear will develop. This is vital for musicians who rely on accurate listening to develop their playing and improvising. 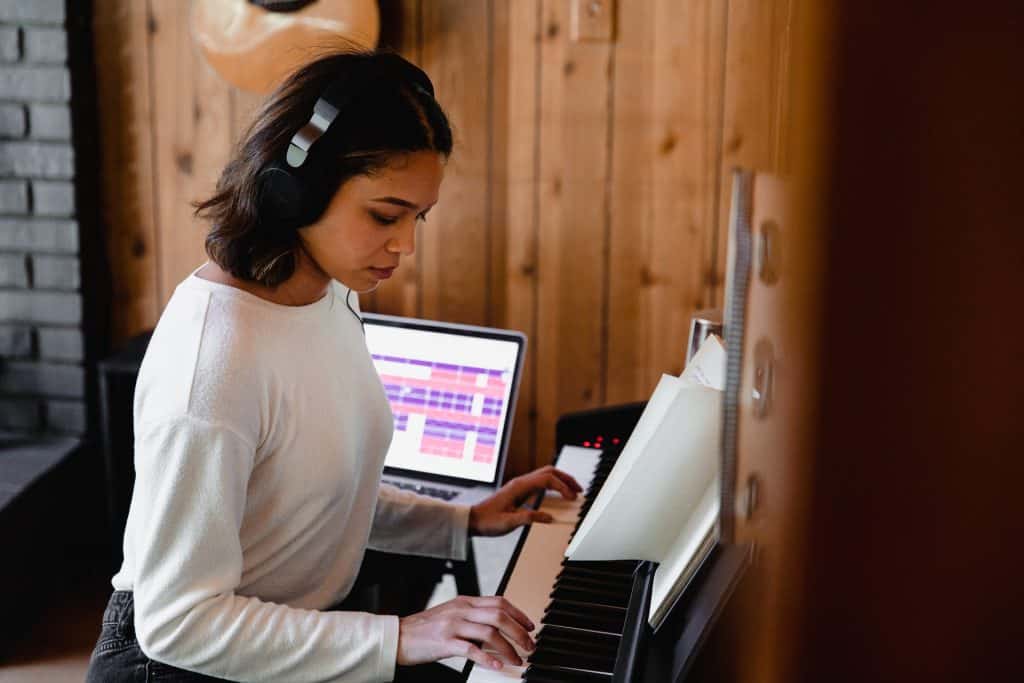 As we briefly learned previously, we can play major and minor chords in any order as long as the notes remain the same. We call this phenomenon ‘inversions’. Inversions are very handy tools that will help add weight, drama, and color to your chord playing.

Major and minor triads are made up of three notes: the 1st, the 3rd, and the 5th. If you simply play a C major chord C – E – G, you will see. Anytime the 1st, or root, is the lowest sounding note in the chord, the chord is in root position. C – E – G or C – E♭ – G will always equal root position. Memorize that.

If we move the root up one octave and then respell the chord as E – G – C or E♭ – G – C, we call this 1st inversion. A 1st inversion triad has the 3rd tone as the lowest sounding note of the chord. This inversion is often used as a transitory chord from one chord to the next.

Finally, if we move the third up one octave and then respell the chord as G – C – E or G – C – E♭, we call this 2nd inversion. 2nd inversion happens anytime the 5th is the lowest sounding tone of a chord. 2nd inversion chords are a little weightier than 1st inversion chords, but they sometimes do not have the fully resolved sound of a root position chord. Experiment with these different inversions on your piano!

You can expand your ears, your technique, your interpretation of songs, and your ability to improvise. You will be able to access 7th chords to jazz up your sound and your songwriting abilities will start to blossom. Don’t waste a minute! Get to work practicing your major and minor chords today!

Oh, and by the way. Here is your Schubert Listening Practice Answer – The minor section starts at 2 minutes and 2 seconds. The major section briefly returns at 3 minutes and 8 seconds before leading us back to the opening theme.