Middle C is often the first note the beginners learn to identify on the piano. It is a solid foundation to begin any piano study. This article will answer the most common questions about Middle C.

How to find middle C on the piano

Middle C is quite easy to find on the piano. Take a minute to look at the keyboard. Do you notice any patterns in the arrangement of the keys? The piano keys are organized into groups of two and three black keys. This layout is a useful tool for developing great piano technique.

Find the group of two black keys more or less in the middle of the piano. Take a look at this diagram if you are lost:

Middle C is the key on the outside left hand side of the group of two black keys in the middle of the piano. You can label piano keys, and here it is labeled on an 88 key keyboard:

And here it is labeled on a 61 key keyboard:

Not too difficult, right? Now that you know how to find middle C on the piano, stand up, walk to the other side of the room, come back to the piano and find it again. Repeat this exercise 5 or 10 times until you are comfortable finding middle C every single time. Nice work!

There is no note that fits perfectly in the middle of the keyboard!

What about a 61 key keyboard? If you have a 61 key instrument, practice this same exercise. What do you discover?

A 61 key instrument has a key that fits perfectly in the middle. That note is called F sharp.

But, if middle C is not in the middle of the piano, then why is it called middle C? The answer requires a little more explanation. 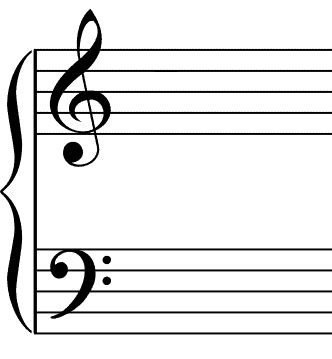 The treble clef is the tool most commonly used to notate music in the right hand on the piano. Middle C is notated here in treble clef:

The Bass clef is the tool most commonly used to notate music in the left hand on the piano. The bass clef  notes are most commonly found below middle C.d

These are the same note. On the grand staff, this note is located here:

Now you will play the second half. Start with your fifth finger (pinky finger) on G, followed by your fourth finger (ring finger) on F, your third finger (middle finger) on E, your second finger (index finger) on D and finally your first finger back on middle C (thumb).

Follow the diagram of the keys below if you get a little lost: 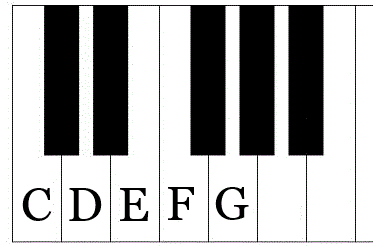 You can practice this warmup from any note by following the same finger pattern, but it is especially useful for finding and practicing from middle C.

The middle of all keyboards

For more information on middle C, check out this awesome video: