Learning the Blues is an integral part of modern music making. The power and influence of the style can be felt in most forms of contemporary popular music and the music carries historical lessons and legacies that are vitally important. Particular scales have emerged out of the music called the Blues scales. Understanding Blues scales is an important access point to playing the music on the piano!

What is the minor blues scale?

The minor blues scale is a six note scale that has emerged from Blues music. It has a powerful, soulful, and often melancholic timbre. It is used across many styles of music including traditional twelve-bar Blues, Boogie-Woogie, Soul, RnB, Jazz, and Funk to name a few.

Seriously, try it! It is somehow ingrained in the human subconscious, especially the first minor third interval.

In the key of C Minor Pentatonic, that means you will add the note G♭. Check out the diagram below to see this new scale notated:

We also call this flat fifth scale degree the blue note. Adding the blue note to the minor is your gateway to the blues.

From F, the scale is spelled F – A♭ – B♭ – C♭ – C♮ – E♭. The blue note in this minor scale is C flat Check out the diagram below to see it notated:

From G, the minor blues scale is spelled G – B♭ – C – D♭ – D♮ – F. The blue note in this minor scale is D flat. Check out the diagram below for the finger pattern:

Minor blues scales from A

From A, the minor blues scale is spelled A – C – D – E♭ – E♮ – G. The blue note in this minor scale is E flat. Check out the diagram below for the finger pattern, you will find it familiar:

Ok! Now that you have played through five different positions of the minor blues scales (C, D, F, G, A) you are ready for some exercises!

First, play through all five patterns in a row, beginning with C, followed by D, F, G, then A and returning to C again one octave higher.

Blues scales with a chord

When you feel comfortable with this, add a chord underneath the scale as notated below: 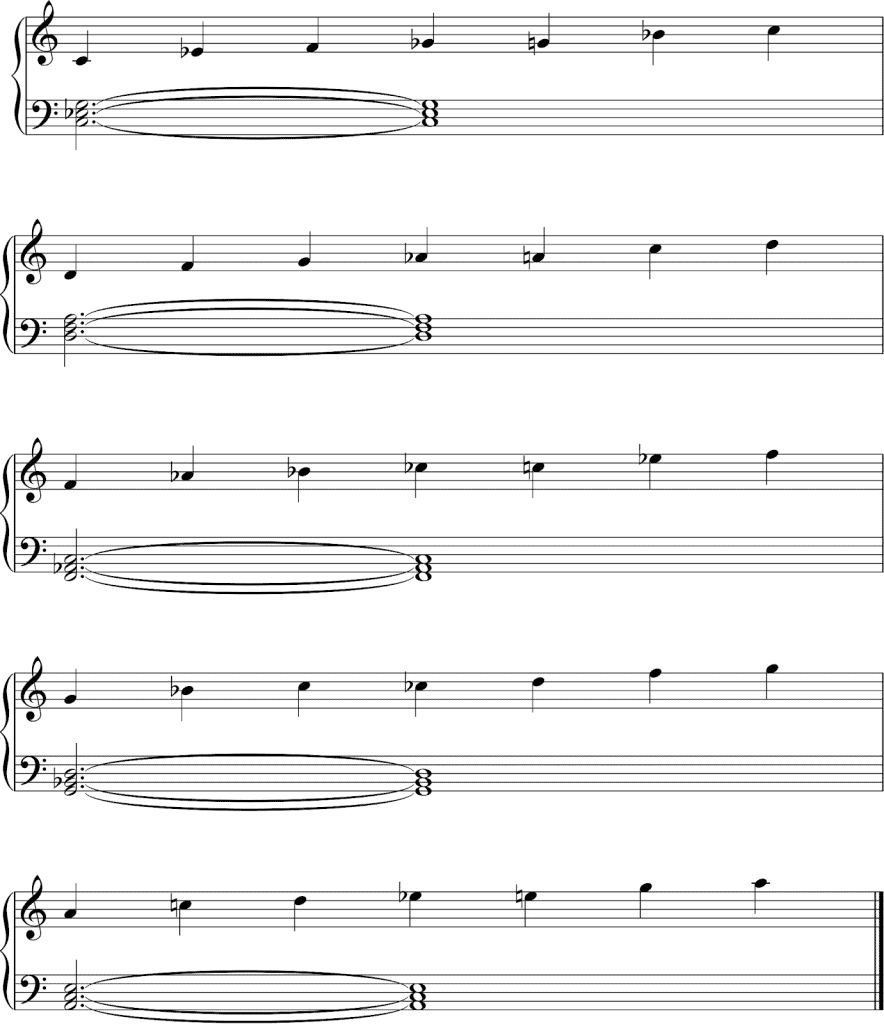 You can also incorporate other exercises into your practice such as sequences. Check out a three note sequence in the C minor blues Scale below:

This sequence pattern is a great exercise to practice to gain dexterity and flexibility with the minor blues scale. You can apply this pattern to the four other positions you have learned.

You can also apply this pattern to any other scales like the piano chromatic scale  you are practicing!

What is the major blues scale?

The major blues scale is a variation on the major pentatonic scale and shares the same addition of the flat fifth scale degree.

All we need to do to transform the C major pentatonic scale into the C major blues scale is add the flat fifth scale degree.

How do the blue notes differ between the major scale and minor scale? Does the major blues scale sound more happy? Is that even possible?

Now that you have five positions of the Blues scale under your fingers, it is time to learn a basic Blues form. As the name suggests, the twelve bar Blues is twelve measures in length and consists of three chords: I, IV and V. Check out the form below:

What are all these chords

All the chords in the chart above are dominant 7th chords.

Measures 9 and 10 are known as the turnaround. There are many, many variations on this form.

Once you feel comfortable playing through the form, try this exercise with the chords in your left hand and Blues scale in your right hand. You can also use the blues scales to play an arpeggio of the chords in the blues progression. 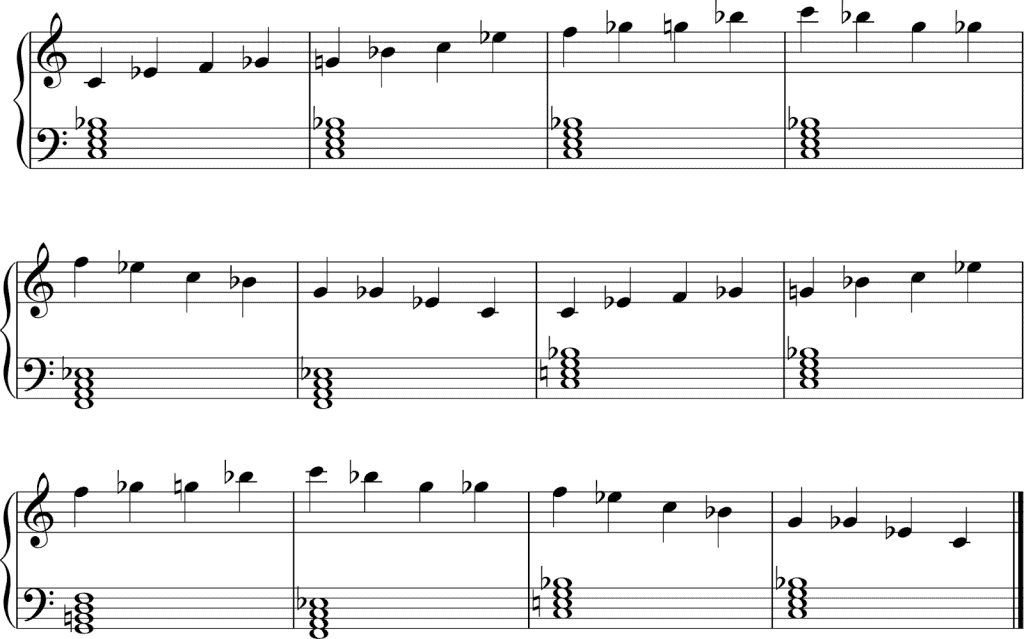 Get comfortable playing through the Blues form in quarter notes. Practicing this will build your fluidity with these shapes and help develop your ears. There are a few points of tension and release that you should become comfortable with.

The first is the transition in and out of the IV chord in measures 5-7 and the second is the turnaround, the V-IV-I progression in measures 9-12. These points act as springboards in the form.

You can use these points to build up tension in your improvisation or as release or resolution points.

Once you feel comfortable with the form in C, modulate the progression to D, F, G, and A.

Some basic riffs and melodies with the blues scale

Now that you have an understanding of the Blues Scale and form, it is important to learn some basic riffs and melodies in the scale. A common melodic structure in the Blues scale is the call and response. The call and response is essentially an AAB form. A musical phrase is sung or performed on an instrument, with a sort of open ending similar to a question mark. The same phrase is repeated again. Then, a second phrase different from the first two answers the question posed by the first phrase. This is an extremely common and effective phrasing structure and you will hear this influence across many genres of contemporary music. Check out an example of this structure below:

This example is a basic, four measure call and response. The first phrase, G-B♭-C, is repeated twice, followed by the phrase G-B♭-C-B♭-G. You might also see this phrase structure called antecedent-consequent in other realms of music theory.

Now check out this same four measure phrase placed in the context of the Blues form: 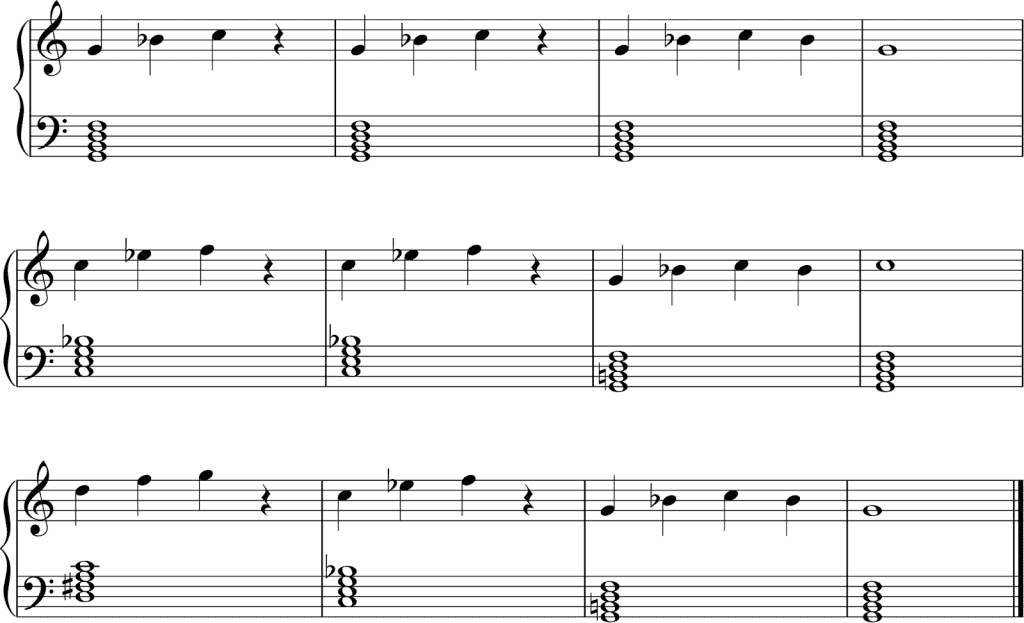 You can develop this technique infinitely. The Blues has been played for at least 100 years and will hopefully be learned and played for hundreds more. Here is another example of a call and response:

Can you identify which Blues scale this melody is from? Can you build the Blues form to match? Can you insert this melody into the Blues scale and modulate and modify it to fit the other chords? Practice this technique until these concepts feel easy and normal to you!

The Blues is a hugely influential style. There is a direct link from Rock n Roll, RnB, Gospel, Jazz, Funk, Soul, and many other genres to the Blues. The Blues scale and form is at the root of all of this. What research can you do for yourself to better understand this style, context, and history? Here are some ideas:

Learning how to play blues scale piano is a crucial part of developing as a pianist and musician. There are so many aspects of the style to learn about, from the different blues scales to progressions, riffs, and iconic melodies – not to mention important social and musical history!

Skoove has a great lesson module all about playing Blues music on the piano! You can check it out below. Don’t forget that you can always try a seven day free trial if you want to explore Skoove before enrolling!

Remember that Skoove features over 400 lessons, monthly updates, one on one support from Skoove piano instructors, access to special courses, and an artificial intelligence engine that listens and helps you to improve as you play.

Get 70% off Skoove for Black Friday!