The evolution of piano keys

The history of the piano is very long and involves many different people. The contemporary key and keyboard system we use was invented primarily by a man by the name of Bartolomeo Cristofori around the year 1700. He was an Italian harpsichord mechanic and musical instrument technician who invented a new keyboard instrument complete with a hammer and damper system, very much like today’s pianos.  At the time, he was employed by the Florentine court of Grand Prince Ferdinando de’ Medici. Their instrument registry lists an instrument called arpicimbalo or “an instrument resembling a harpsichord.” The instrument was described about a decade later by poet Scipione Maffei as gravicembalo col piano, e forte (harpsichord with quiet and loud), which is the first usage of the original name, fortepiano or loud-soft.

Cristofori’s fortepiano developed over the next century and by the mid-1800s had expanded to a 7 octave keyboard, big enough for the expressive range of emotions found in the music of Frederic Chopin and Franz Liszt. By 1880, piano manufacturer Steinway debuted the 88-key piano and their model has been the standard ever since.

The 88 key piano includes 7 octaves plus an additional 3 keys below the bottom C. The contemporary piano has 52 white keys and 36 black keys with one octave equal to 7 white keys and 5 black keys.

How many keys are on a piano?

Have you ever wondered how many white keys on a piano? How many black keys on a piano? Almost every type of acoustic piano has exactly the same amount of keys, which is commonly 88. This number might seem odd, but we have to remember that inside of each octave of the piano we have 12 individual notes, and that those individual notes repeat themselves every time that we land on the same letter, repeated an octave above.

The lowest note on a classical acoustic piano is a low A. Then we continue up 7 octaves, getting us to 84 keys, then we add a final A, Bb, B and C note and that lands us at the final number of 88. It is common for other instruments that use a keyboard, like an organ, to have much fewer notes or even two different piano beds one on top of another. Notice that they both have fewer notes than a traditional keyboard, but that is not a problem, that is intended! Many different types of keyboards work for many different styles of music.

Contemporary composers generally stick to the standard 88-key range of the piano, but there are some exceptions. The world record keyboard is 9 octaves with 108 keys made by Stuart and Sons in 2018. Bosendorfer builds a 97-key piano with 9 extra keys at the bottom of the instrument. These extra notes on a piano keyboard add deep harmonic resonance to the already rich sound of the instrument.

White keys on a piano

The white keys on piano are commonly the first thing that a new pianist will learn. This is not because they are more simple, but because the letters of our music system fall on the white keys, in alphabetical order. We can use the keys to find our way around playing any piece of music, or making any impressive chord. The white keys also entirely show the C major scale.

The keys on the piano are very often called the simple way to play the piano, but many seasoned pianists will actually tell you playing in key signatures with only white keys can often be more difficult on your hands than playing in a key that has both white and black keys, because they fit better in your hand.

Black keys on a piano

The black keys on the piano are generally thought of as being trickier than the white keys on a piano, simply because they are raised up physically on the keyboard. This is a common misconception: black keys are the best thing about learning to play, because they let you understand where your hand sits on the instrument, and they also allow you to physically feel your way around the keyboard in such a way that you do not have to use your eyes to look at your hands. Eventually you will learn to trust your hands and feel your way around. This is how many famous blind pianists were able to perform at such a high level, the instrument is very easy to feel and let your hands be your eyes, while you look at music.

The difficult thing about learning your black keys is learning that they can have two different names, depending on which one of our keys we have modified. Take for instance the key Bb. Flat means that the note is one half step lower than previously. That black key can always be found, because it is the last key in the group of three black keys, simple. However, that note can also be called A#. You can rely on the fact that music always needs to be correct alphabetically, so in any key signature we can only have one of each, and so we have to sometimes call a black key a flat or a sharp in order to have the correct order of letters.

The keys are made in a number of different styles and with different weights. Some are weighted, some are unweighted. The weight of the keys makes the biggest difference, but sometimes this lack of weight can allow for interesting tricks and techniques, like sliding your fingers around on an organ would be physically impossible on a hammer acoustic piano. It is important to understand these differences when you are deciding between a digital piano vs keyboard.

How to identify keys on a piano

Have you ever looked at the keyboard and wondered how anyone could possibly remember the names of all the notes on a keyboard piano with 88 keys? There are a few tricks to remembering all the notes on the piano key names. The first trick is to learn the patterns of the black and white piano keys. If you look at the keyboard, you will notice there is a repeating pattern of groups of 2 and 3 black keys. You can use this pattern to orient yourself in the piano scales on the keyboard.

The note C is on the outside-left of the group of 2 black keys: 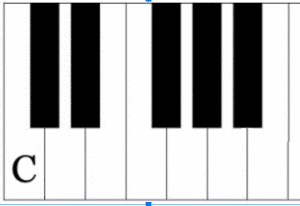 After that, just follow the musical alphabet up the keys until you reach C again, one octave higher! Now you know the names of all the white keys on piano.

Another helpful trick is to label the note names on your keyboard. You can accomplish this with easy to remove tape. Place a small piece of tape on each of the keys and label the letter names with a pen that will not fade. That way the ink won’t come off on your fingers! This is a great trick for beginners to get to know the keyboard layout quickly and efficiently. Once you have your piano keys labeled, you can get rocking on some great tunes!

Learning how to play all of the keys!

From its first incarnation as the harpsichord, to the most complex synthesizer – the piano and the keyboard is one of the most important inventions in the history of western music. Understanding the keys of the piano and the process that they are named and ordered, is the first step in truly gaining mastery of all types of music, and letting you make all your musical ideas come true.

The real piano keyboard has an amazing 88 keys. All the keys consist of a pattern of two black keys, seven white keys, repeated through the whole keyboard. These notes contain all the pitch in music, and all the notes of the orchestra in one instrument. It comes in many different styles and configurations, with many different actions and characters.

Skoove’s online piano lessons are fun and will get you further on your journey to piano mastery! With over 400 lessons to choose from and an integrated listening program that gives you feedback in real time, so you can use your time the best way you can and master the instrument faster than ever.