Piano scales are an important part of developing your playing skills and understanding the building blocks of music. They help enormously to understand key signatures.

If you have ever wondered why pianists play them, how they work and what the benefits are then you are in the right place. With a simple formula you will learn to play major, minor and blues scales. If you incorporate a few minutes of learning and practicing scales into your daily schedule, you’ll soon see the advantages of making time for scales.

What are piano scales?

Musical Scales are commonly misunderstood, but they are actually quite simple. Scales are a group of notes, in alphabetical order, that are a specific distance apart from each other. We think of scales as having two parts, a root and a quality.

In the F major scale, the Root is “F”, which is the note that we begin counting our scale from, it is our first letter in our musical alphabet in this scale.

The quality of the F major scale is major. This means our pattern of whole steps and half steps will be the exact same as every other “Major Scale”. So, even though an F Major Scale and an A Major Scale have different Root Notes, their scale “Qualities” are the same. This is why we are going to teach you the piano scales for beginners. Starting with the pattern for all major scales, and then you will learn all of the scales simultaneously, instead of just one.

Whole-steps and half-steps – the building blocks of scales

Before learning how to build these scales here is a reminder of Whole Steps and Half Steps.

Practicing scales is the key to knowledge of the piano.  Not only do they increase your awareness of key signatures, but they also lead to finger endurance and muscle memory. Your speed playing scales will turn into confidence and ease in pieces of music you play.There are so many productive ways you can practice scales and arpeggios that will make playing them fun rather than a chore!  In addition to practicing in the circle of fifths, here are some great ideas to incorporate into your daily practice:

6 tips for practicing your scales

There are so many productive ways you can practice scales that will make playing them fun rather than a chore!  Here are some great ideas to incorporate into your daily practice:

💡 Click here to jump down to the piano scales generator

The most common types of scale are major scales, minor scales and the blues scale.  Let’s look at each type. Remember what was written in the introduction. Scales have two parts, a Root and a Quality. Here we will focus on learning the different Qualities of Scales. First we look at Major.

Major scales are usually associated with upbeat and optimistic music. To build a major scale you follow this pattern of semitones and tones. Major Scales are the most common in all music, and they are the starting place for almost every pianist. 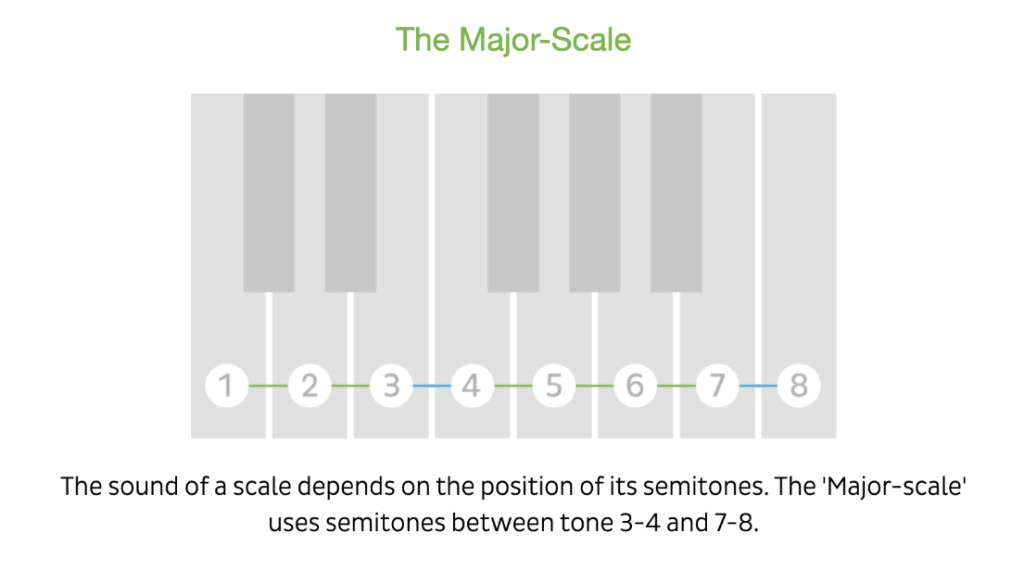 There are three main different types of minor scales: natural, harmonic and melodic.

While major scales sound quite happy, minor scales sound mysterious, sad, or exotic. They are often used to express more complex emotions. Pay attention to how the scale degrees are different than major. The construction of a natural minor scale looks like this: 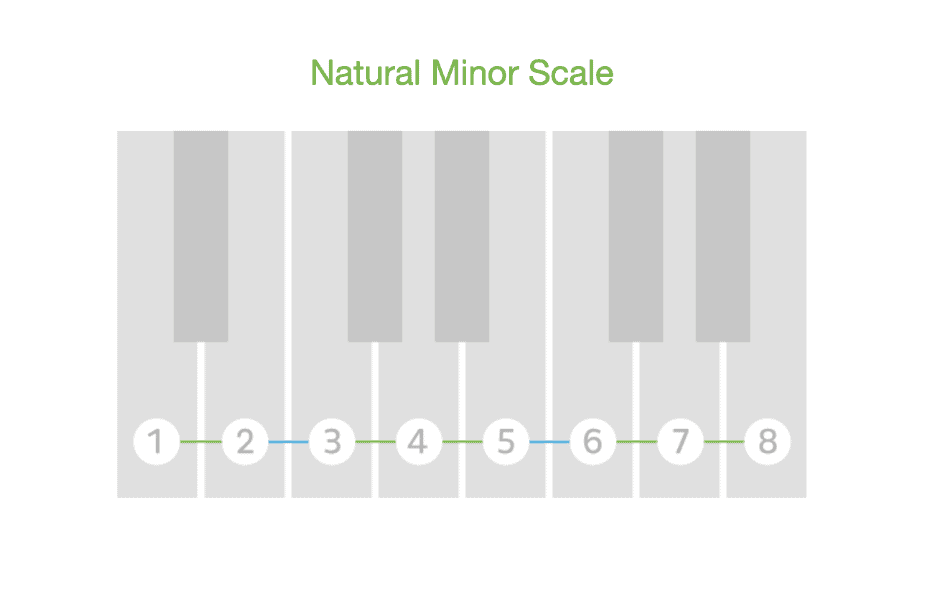 The natural minor scale is also called ‘aeolian’ scale. The semitones are between note 2-3 and 5-6.

The harmonic minor scale is notable for its raised 7th note which does not appear in the key signature. This raised 7th means there is an interval of 3 semitones between the 6th and 7th note. This is the most commonly used minor scale in western music. The construction looks like this: 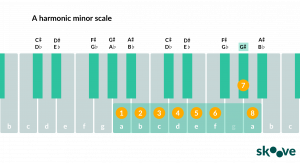 This is an advanced Scale Pattern, so don’t worry about skipping it and coming back to it. It sounds like a major and minor scales been played at the same time. 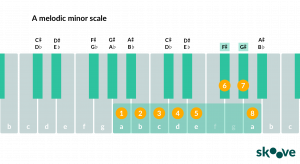 Contrary – meaning opposite – and motion – meaning movement.  These are scales that move in opposite directions and are fun to play.  Certain keys are really challenging to play in this way, but give you the next level of skill if you practice them!

Another very commonly used scale in blues, jazz and even popular music is the Pentatonic scale.  It’s a shorter scale, consisting of 6 notes, (if you double the root note at the top), and it has a major and minor variation.  The major pentatonic is structured like this: 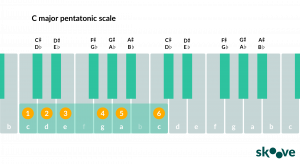 Play a minor blues with the minor pentatonic scale 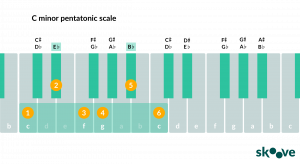 How to play the whole tone scale

This type of scale sounds rather “ethereal” and romantic.  Claude Debussy used this scale frequently in his music.  Listen to “La Mer” arranged for two pianos to get the sense of wonder that this scale conjures.

The construction is just as its name implies:

This piano scales generator from Pianoworld is handy tool to learn scales. It is interactive and easy to use.

If you are reading this from a mobile device, rotate it to display the tool in full width.

* You can do the same with scales.
** You can invert chords and scales

​Summing up the scales

Exploring new and interesting scale patterns can lead to some very interesting results. Maybe you will try a new scale and think of sadness, or sunlight, or outer space, or something crazy like the chromatic scale! You can even try combining your new scales with basic piano chords

There is a reason why composers and pianists of all skill levels practice scales, because they are the key to learning about new major keys and new ways to express yourself. The best way to learn to express yourself with the piano is by taking online piano lessons, and using the new Piano Learning App Skoove’s Free Trial!