Do you know how to identify rest notes when reading music? When listening to music, you probably never notice all the moments of pause. Your ear is more focused on the things happening in the song, such as the lyrics or a catchy melody or rhythm. But actually, the silent space is just as important as sound.

A pause in music provides relief and builds suspense. Without it, music would lose important parts of its meaning. In this post, we will explore how silence is used on the piano and how it is shown with music notation and music theory.

What are rests in music?

We mark silence in music theory using “rests.” Res notes in music are little musical symbols that tell the player to be silent for a particular number of beats and are extremely important to understand when you learn how to play piano.

Just like notes, rests can last for different durations. Let’s take a look at some different music rest symbols, investigate how they work, and learn how we can recognize notes quicker.

Music rest symbols: what are they?

A quarter rest or crotchet rest looks like this:

Imagine it like a sort of ‘Z’ with a backwards ‘C’ connected at the bottom. The quarter rests or crotchet rests are analogous to quarter notes. It has the same duration of 1 count. The only difference is that instead of pressing down a key, you “rest” your fingers.

Half rest or minim rest

A half rest or minim rest looks like this:

In music notation, this rest symbol is a rectangle that sits on top of the middle line of the staff. The symbol extends upwards and fills about ½ of the fourth space on the staff. This rest has the same duration of two beats as half notes. Remember when you are sight reading that two minim notes equal one whole note.

It might seem intuitive that we would use dotted rest notes in the same way we use dotted notes. However, this is often not the case. You might occasionally see a dotted quarter rest, but you will almost never see dotted half rests like you see a dotted half note. The combination of a quarter rest and half rest is most frequently used to measure the length of three beats, instead of dotted rests. You can learn about this and much more with online piano lessons from Skoove.

The whole rest or semibreve rest looks like this:

The whole rest or semibreve rest is also a rectangular musical shape. These rests hang down from the fourth line of the staff and likewise measures half the length of the fourth space.

Whole rests are analogous to whole notes. Like the whole note, the whole rest lasts for a length of four beats in a 4/4 time signature.

One major difference between notes and rests is that you will often see notes nights together to increase their length. For example, you will never see rests tied together in a piece of music to increase the number of beats you play.

Smaller lengths of time in notation

So far, we have learned how to measure pauses in larger durations. But, how do we use music rest symbols to measure a smaller value of time? We use an eighth rest and a sixteenth rest to notate a smaller pause in sheet music.

How to count this?

(one and two and three and four and)

Here is an example of some basic piano chords with a couple of eighth rests thrown in:

A sixteenth rest or semiquaver rest looks like this:

How to count this?

For example, we count this musical rest in the same value as well: 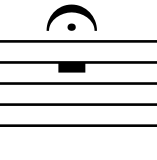 The fermata symbol looks like a crescent shape with a dot inside of it. The fermata symbol extends the value of the corresponding note or rest. It is generally up to the performer how long to play the fermata. Learning to read these symbols is just as important as learning how to remember piano notes.

What is this rest used for?

A rest followed by a fermata is usually used to extend the length of time musical sound should play or to introduce some element of drama or space to music. You will commonly see rests with a fermata at the end of a piece of music or between sections.

Tie it all together

The rest is used to mark pauses in written music. It is just as important to play rests for the number of beats they are written as it is to play a note. There is a corresponding note for every rest. Rests can occur on any beat, in the middle of a measure, or at the end of a bar. Make sure you pay attention to these very important symbols when you see them!

Skoove can help you to learn how to read rests more easily. With interactive lesson plans that you actually play along with, your ability to read rests will increase every time you practice. Try a seven day free trial and see how fast your reading skills grow!