Piano chords can be an intimidating concept to beginning musicians. We so often only associate music with one note at a time, but chords are when we play multiple notes at the same time, often across many different octaves, and often with two hands! Chords with only three notes in them are called triads. This article describes what happens when we call chords that have four or more different notes in them. Also we will learn how to incorporate different seventh chords into your own music, and to read them from a chord chart. For pianists, seventh chords can be an eye-opening experience and fuel an exciting progression in your playing.

Because we know that a chord is what happens whenever you play 3 or more notes at a time, we also need to have a name for when a pianist plays four notes at a time. They cannot be called “triads” because the prefix tri means 3, so naturally a chord called a triad has only three notes in it.

Contrastingly, a seventh chord does not follow the same logic, and it does not have seven notes in it, but it takes a triad and adds the interval of a 7th from the root. When calculating piano intervals it is important for you to remember that intervals are based on the alphabetic relationship between two letters, rather than a mathematical difference. This is a key concept of music theory, and of expanding your knowledge on an instrument.

However today you will struggle to find a radio station playing music that does not feature seventh chords.

Before we dive into the world of seventh chords, it’s important you have a good grasp of two things: basic major and minor chords and intervals.

The term seventh chord refers to the interval between the root of the chord, and the note added on top of the base type of triad. For instance, you can think of the chord C Major 7th, as a C Major Triad with a Major 7th. The different seventh piano intervals we have are:

We can also calculate the 7th intervals by counting just semitones from the root, but we have to remember to combine the semitones with our alphabetic seventh. This sounds much more complicated than it is, just make sure to count from the root up seven letters, and then count the semitones.

Examples of different types of sevenths in the key of C major:

Remember that we have to call the note B double flat, because the note “B” is 7 letters away from C.

Seventh chords are built by using one of the four triads above and adding a seventh above root of that triad. All seventh chords feature some variation on the scale degrees 1 – 3 – 5 – 7. The seventh adds a level of depth, emotion and complexity to the triad which can then make it appropriate to be used in music such as Jazz, R & B, Blues, film music and many pop chord progressions.

Music genres tending not to use Seventh chords would be the likes of Rock, Heavy Metal, EDM, early medieval and Punk. Let’s explore the different types of seventh chords.

The first chord we are going to look at is the Major Seventh chord. This is a common chord which you will have heard in many types of contemporary music and even so far back as the romantic era with examples in Claude Debussy’s “Claire De Lune.” Major seventh chords are often found in romantic ballads and soul music. They possess a warm feel to them and you find them used a lot in love songs.

The major seventh chord is created by adding a major seventh to the root of a major triad. In the key of the C major scale, in root position, the chord would consist of C, E, G, B.  For this chord symbol, you will often see it written on sheet music and lead sheets as Cmaj7 or  C∆. 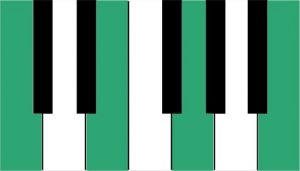 Much like learning a new word, the best way of learning about seventh chords is to understand the theory behind them and then see and hear them in context. Take a look at this tutorial of Coldplay’s “A Sky Full Of Stars” in Skoove to experience the major seventh chord in action.

Minor seventh chords are another heavily featured chord in Pop and R & B Music. They are versatile chords that can be used in succession to create a sombre feel to a song. To create a minor 7th chord, just add a Minor Seventh to the root of a minor triad. In the key of C minor, in root position, the chord would consist of C, E flat, G and B flat. For this chord, you will often see it written on sheet music and lead sheets as Cm7, Cmin7 or C–. 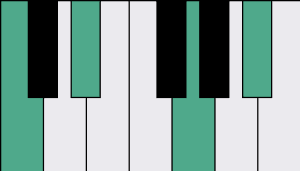 Before we move on to dominant seventh chords, a great way of consolidating what we have gone through so far is to take a look at the ‘Candlelight chords and seventh chord formula’ lesson below. Here, Skoove patiently walks you through a progression that features both the major seventh chord and minor seventh chord.

Dominant Seventh chords are a staple of Blues and Jazz music, but are also featured in other genres such as Latin, Bluegrass and Pop. They have a unique energy about them combined with a tension created by the tritone within them. To create a dominant seventh chord, you add a minor seventh to the root of a major triad (major minor seventh chord). In the key of C, in root position, the chord would consist of C, E, G and B flat. For this chord, you will often see it written on sheet music and lead sheets as C7, occasionally Cdom7. 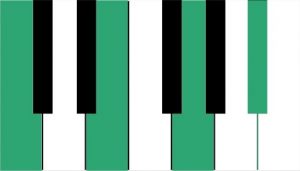 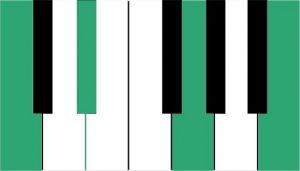 The half diminished seventh chord has been used in music for centuries and can be found as far back as compositions by Bach, Chopin and Mendelsohn. The chord sounds quite melancholic which also lends it well to being used in Jazz and musical theater. To create a half diminished seventh chord, you add a minor seventh above a diminished chord. In the key of C, in root position, the chord would consist of C, E flat, G flat, and B flat. For this chord, you will often see it written on sheet music and lead sheets as CØ7 or Cmin7(b5). 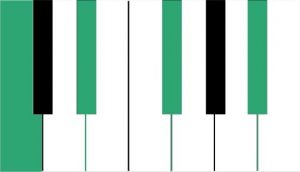 An excellent example of this chord is featured in the Latin jazz song “Sway.” See the tutorial below to learn how to play the half diminished seventh chord as part of a well-known mambo jazz classic.

Diminished seventh chords are not as common in contemporary music. However, you will find them a lot in music from the Classical and Romantic eras and in various film scores as they are fantastic at creating a sense of trepidation, tension and doom. To create a diminished seventh chord, you add a diminished seventh above the root of a diminished triad.  In the key of C, in root position, the chord would consist of C, E flat, G flat, and B double flat. For this chord symbol, you will often see it written on sheet music and lead sheets CΟ7 or Cdim7. 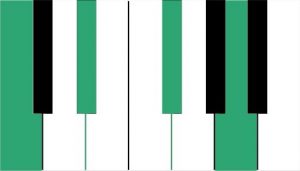 For a great example of this chord being featured beautifully, check out the Skoove tutorial “Au Claire De Lune” below and pay attention to the piano notes in bar 3. Skoove allows you to study the score here whilst listening to the sound of the diminished seventh which will help you to learn both how the piano chords are notated and how they sound.

Augmented seventh chords are most commonly featured in jazz music, particularly as substitute chords for dominant sevenths. To create an augmented seventh chord, you add a minor seventh above the root of an augmented triad. In the key of C, in root position, the chord would consist of C, E, G sharp, and B flat. For this chord, you will often see it written on sheet music and lead sheets Caug7 or C7(#5). 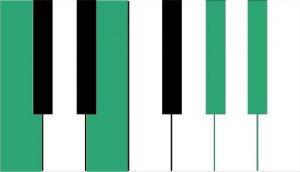 Try including an augmented seventh chord as a substitute for a dominant seventh using the chords in the Georgia On My Mind tutorial as a guide.

Piano is a lifelong journey. Sometimes we progress rapidly and other times it will progress more slowly. However there are times when there are “Ah ha” moments of realization and discovery where we come across something that leapfrogs us to the next level in our understanding of music.