When looking at a new piece of music there is almost always a tempo indication at the top of the page. These tempo indications or tempo markings indicate which speed you want to actually play the piece at. These are also called the original tempo of a piece of classical music. Words like allegro or andante or maybe even vivace are all terms for tempo. These tempo instructions are an integral part of musical notation, which tell us when there will be a tempo change. This article will cover everything from common tempo markings to ones which will indicate a new tempo.

Originally, tempo markings were given as the title of a piece or to indicate a particular dance style, but as music progressed into newer venues, the usage of tempo terms also expanded. Understanding how tempo markings work will deepen your knowledge of music and enhance your abilities as a performer and listener of music!

What is tempo in music?

Tempo is the word musicians use to describe the speed of the music. A faster tempo in music means a faster speed, while a slower tempo means a slower speed. There are many music terms for tempo. Common tempo markings indicate how a note will be adjusted in the same way that time signatures indicate to us which keys we would play. Different tempos use different words, and many use one or more words, or additional Italian words in order to indicate how the notes will be adjusted relative to the metronome marking.

Most frequently, we use the Italian tempo markings definition, but there are markings for tempo in other languages as well. It is not uncommon to use German tempo markings, or combine common tempo markings with a bpm in English. This way you have both a tempo indication and a functional English indication. Regardless of the tempo of a piece of music, you need to always remember to honor the articulation in music.

Why is tempo important in music?

Tempo in music is important because, without understanding tempo, we would have no idea what speed to play a particular piece of music. For example, the intro to Bohemian Rhapsody is performed in a slow and dramatic style. This piece would sound completely different and lose its contrasting and dynamic character if the intro was performed quickly. Without understanding how tempo works in music, we would not grasp this important point, and consequently, lose out on some of the most powerful and dynamic aspects of music!

There are many different tempo markings in music. We will learn about the most common music terms for tempo first. Most of these Italian tempo markings can be found on the online metronome and can also be found at the beginning of any piece of music above the key signature on the top left side. Here are some common examples of music tempo markings. 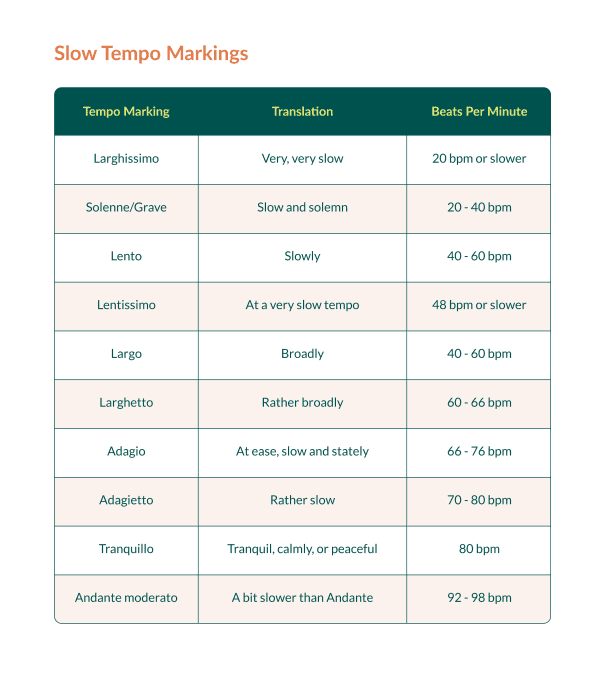 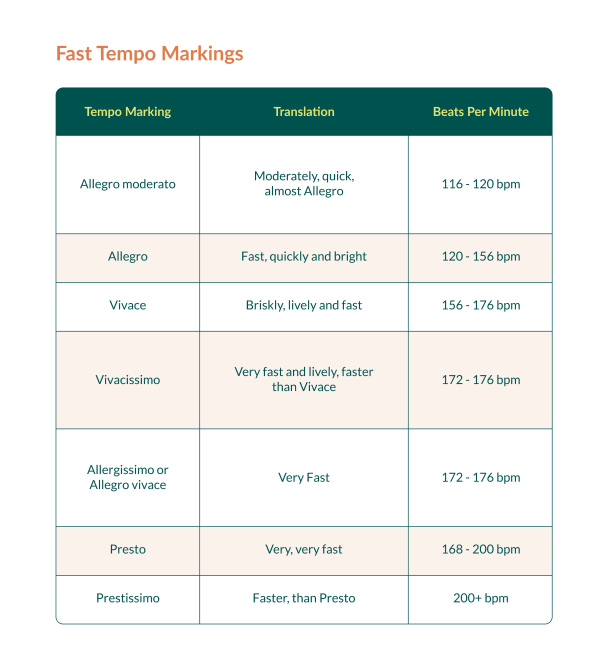 It is important to understand a little bit of the history. Tempo indications as we understand them now, first appeared in the Baroque and early Classical periods. Most pieces of music were given titles based on the tempo of the piece. Titles were also given based upon the type of dance that a piece was composed for, or for the musical mode of the piece. Italian is used primarily because Italy was an early hub of music during the Renaissance and Baroque periods, but as composers from other regions gained popularity, tempo markings in French, German, and English gained usage as well. Today, you will find music tempo terms in all languages and with many more variations beyond the basic Italian tempo markings, we covered here. Use our tempo markings chart: 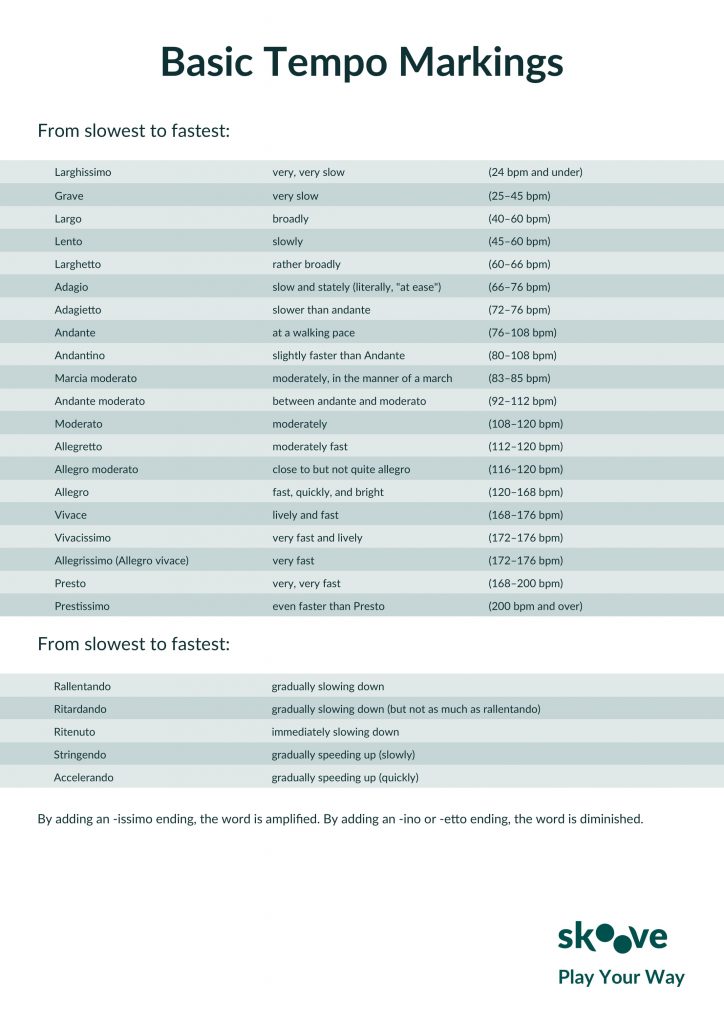 Beats per minute in music

Beats per minute or the BPM meaning is simply how many beats will be played per minute by your metronome, or your subdivision. This will have a dramatic impact on tempo depending on which note division your metronome will play. For instance, if your metronome is playing sixteenth notes at 180 beats per minute, the tempo of the music will actually be quarter note is equal to 60, which is a bit slower than you would expect. This tempo marking is actually a slightly slower, almost andante, or walking pace. what note value, or how many different beats, or subdivisions of your own tempo will be represented in each

How do you differentiate the two tempos?

What is different about an allegro at 120 versus an allegro at 160? To differentiate tempos, we often add a few different suffixes or combine two terms together to create a hybrid tempo. The suffixes we add are –issimo, -ino, and –etto.

The suffix -issimo amplifies tempo in music. For example, prestissimo is very, very fast, even faster than presto. Vivacissimo and allegrissimo or both at the faster ends of vivace and allegro, generally 172-176 bpm. Larghissimo is very slow, like a glacier melting or the sands of time-shifting in a forgotten desert.

The suffixes –ino and -etto

The suffixes –ino and -etto diminish a marking. For example, allegretto is a way to describe the slower end of allegro, or tempos that are within 10 bpm of 120 bpm, and larghetto is slightly faster than largo, around 60-66 bpm.

At other times, two music tempo terms are combined to form hybrid marking that captures and combines the essences of the two. An example of this is allegro vivace, meaning fast and light around 176 bpm. Andante moderato or allegro moderato are other examples of this hybrid approach. By using these suffixes or hybridizations of tempo markings and changes, we can cover more territory and learn to be more descriptive of our own music-making! Tempo doesn’t just affect rhythm in music or melody in music.

How do we describe changing tempos in music? If a song begins adagio, then speeds up to allegro, and ends largo, how will we know this is happening? How can we write this in our own music? Here are the main terms used for speeding up or slowing down tempo:

Learning to practice playing tempo is as simple as using a piano learning app, to make sure you’re always using a metronome and following the note value indicated by the traditional Italian markings. Always make sure that you have your metronome handy, and that you can follow exactly the correct tempo for each subdivision of note. Make sure you are not playing a bit slower than indicated, and try to keep everything written in the musical scores you’re playing as accurate as possible. A great place to start is by using the metronome built directly into the Skoove app, and use the lesson Minor Pentatonic Scales and follow the metronome. Try to start at andante moderato and work all the way up to molto allegro. Rely on using the metronome so that you can build the skill into your fingers.

Hopefully now you have an adequate answer to the question of what is tempo and how to apply it to your piano keys. Tempo is how musicians refer to the speed and often the feeling of a particular piece of music. Traditionally, tempo markings in music are given in Italian, but they are also common in French, German, English, and just about every other language.

Skoove is here to help you on your journey to learn all the hidden mysteries of music! There are many terms in music that can be difficult to understand, but with Skoove’s online piano lessons, learning music is fun and easy.