The diminished scale, or octatonic scale, is an enigmatic and distinct scale that offers a great deal of melodic and harmonic depth and possibility. There are examples of the diminished scale in European classical music dating back to the time of Bach and also in various folk music traditions from the Middle East. However, the scale became a more established and widely recognized tonal color during the 20th century thanks to composers like Igor Stravinksy, Olivier Messian, Béla Bartók, and Claude Debussy among others.

In this article, we will explore the construction of the diminished scale, learn how to play the scale on piano, and explore some of the scale’s possible harmonies. When you are ready, dive in!

What is the diminished scale?

The diminished scale can also be created by the combination of two fully-diminished seventh chords one half step apart. We will explore this more when we dive into the harmonies of the scale.

How to build the diminished scales

Check it out notated with the piano finger positions below:

Check out the whole-half diminished scale notated with piano fingerings below:

And here are the 12 whole-half diminished scales:

Time for some practice

Check out the piano scale below:

Check it out notated with piano fingerings below:

With its expanded melodic and harmonic palette, the diminished scales have found a home in 20th and 21st century classical music, in film music, in jazz music, and even in rock music. The scale offers many possibilities beyond the simple tonality of the diatonic scale. Let’s explore now some of the harmonic possibilities of the whole-half and half-whole diminished scales.

If you feel like you need some basic overview on scale theory before diving into the depths of the diminished scale, consider studying with a piano learning app to build your skills.

Chords of the half-whole diminished scale

Already we can see that there are many more possible chords inside this single diminished scale than in any of the diatonic scales like the harmonic minor scale. Also, notice how each of these notes (C, E♭, G♭, A) are each a minor third apart? This is part of the symmetrical nature of the diminished scales. If you start the half-whole diminished scale from any of these tones, you will place the exact same set of pitches. These scales are like multidimensional fun house musical mirrors.

Below are the possible triads built from each tone of the C half-whole diminished scale:

There are 16 basic triads inside the half-whole diminished scale. Notice how each of the symmetrical pivot points has three triads associated with it (major, minor, and diminished) while each of the passing tones (D♭, E, G, B♭) only have a diminished triad. Notice again that the combination of these passing tones spells the second fully diminished seventh chord (D♭ – F♭ – A♭♭ – C♭♭) that we briefly touched earlier.

Spend some time exploring these triads. They offer a significantly wider range of possibilities than the basic diatonic scale triads.

Chords of the whole-half diminished scale

Here are the possible triads in the C whole-half diminished scale:

How to use the diminished scales

At this point, you might be wondering how exactly to use these scales. Naturally, this is a perfectly legitimate question. The best thing to do at this point is to practice the finger patterns and the matching chords until you can comfortably access the sounds. After that, you can dive into more advanced applications of the scale.

Master this pattern and then begin to explore how you can manipulate it to your own tastes: 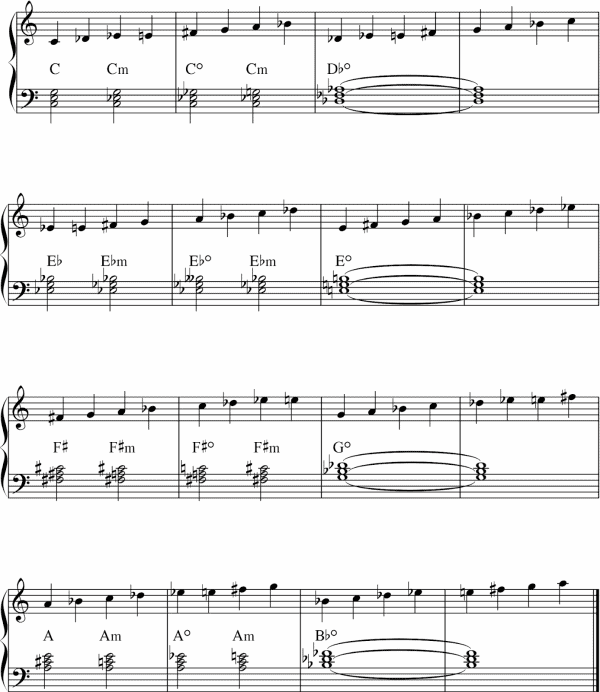 Piecing it all together

The diminished scale is an advanced and intriguing sound. Not everyone finds it pleasant, but it opens the gateway to an entire universe of synthetic and symmetrical scales. Remember there are two main variations on the diminished scale: the half step-whole step scale and the whole step-half step scale. Both scales are built from a repeating series of half steps and whole steps.

There are many chords inherent in the diminished scales – at least 8 diminished chords as well as four major and four minor chords. Additionally beyond that there is an entire realm of seventh chords and extended harmonies to explore. Once you are comfortable with the basics, spend some time diving into these more advanced uses. Follow composers like Stravinksy, Messain, Jonny Greenwood, and others as guides.