The whole tone scale is a surreal and enigmatic sound that often feels ambiguous and unanchored. The scale is perfect for creating dream-like passages and is commonly found in the work of Impressionistic composers like Claude Debussy and Maurice Ravel. However, examples of the scale date back to the 17th century.

The whole tone scale offers an interesting palette of colors and textures to explore with a very distinctive sound that is quite different from the traditional diatonic scales. Learning to use these sounds will expand your ears and open your fingers to new and interesting sound worlds.

In this article, we will learn the construction of the whole tone scale, explore the two variations of it, and learn the chords associated with it. When you are ready, dive in!

What is the whole tone scale?

The whole tone scale is quite literally a scale built in a series of whole steps. It is one of the most straightforward musical ideas. If you feel like you need some refreshment on basic scales and chords, consider trying some online piano lessons.

How many notes are in a whole tone scale?

The whole tone scale consists of six notes and is therefore called a hexatonic scale. However, there are many possible six note piano scales, so musicians primarily refer to this set of pitches specifically as the whole tone scale.

The whole tone scale also consists of half the notes from the chromatic scale.

How to build the whole tone scale

This means the C whole tone scale is spelled:

Not too complicated, right? Check it out notated for the piano below:

Of course, we could also notate the scale with the sharp notes written as enharmonically equivalent flat notes like this:

The second variation on the whole tone scale begins on D♭. It follows the same pattern of a series of whole steps.

This means the D♭ whole tone scale is spelled:

If you want to think in terms of scale degrees, the formula for the whole tone scale would be:

There is some ambiguity in this situation. It is not common to see a sharp sixth scale degree. However, if you notate the pitch as A♯, that is technically the sharp sixth of C. This is one instance where there is some malleability in music theory.

Why are there only two whole tone scales?

The whole tone scale is a symmetrical scale. This means that you can start from any tone in the scale and the scale will consist of all of the same pitches.

Likewise, the whole tone scale does not produce a definitive tonic to dominant cadence like the diatonic scales or harmonic minor scales do. Consequently, the root of the scale is malleable and more dependent on musical gesture and expression for resolution than a strict harmonic motion.

The chords of the whole tone scale

If we put these notes in alphabetical order from C, we find C – D – E – F♯ – G♯ – A♯, the notes of the C whole tone scale. Additionally, it is important to remember that augmented triads, like diminished triads from the diminished scale, are symmetrical chords.

Triads of the whole tone scale

Let’s use the process of stacking thirds to build the piano chords of the C whole tone scale. Remember, all you need to do is alternate every other note in the scale to build these chords. Check them out notated below: 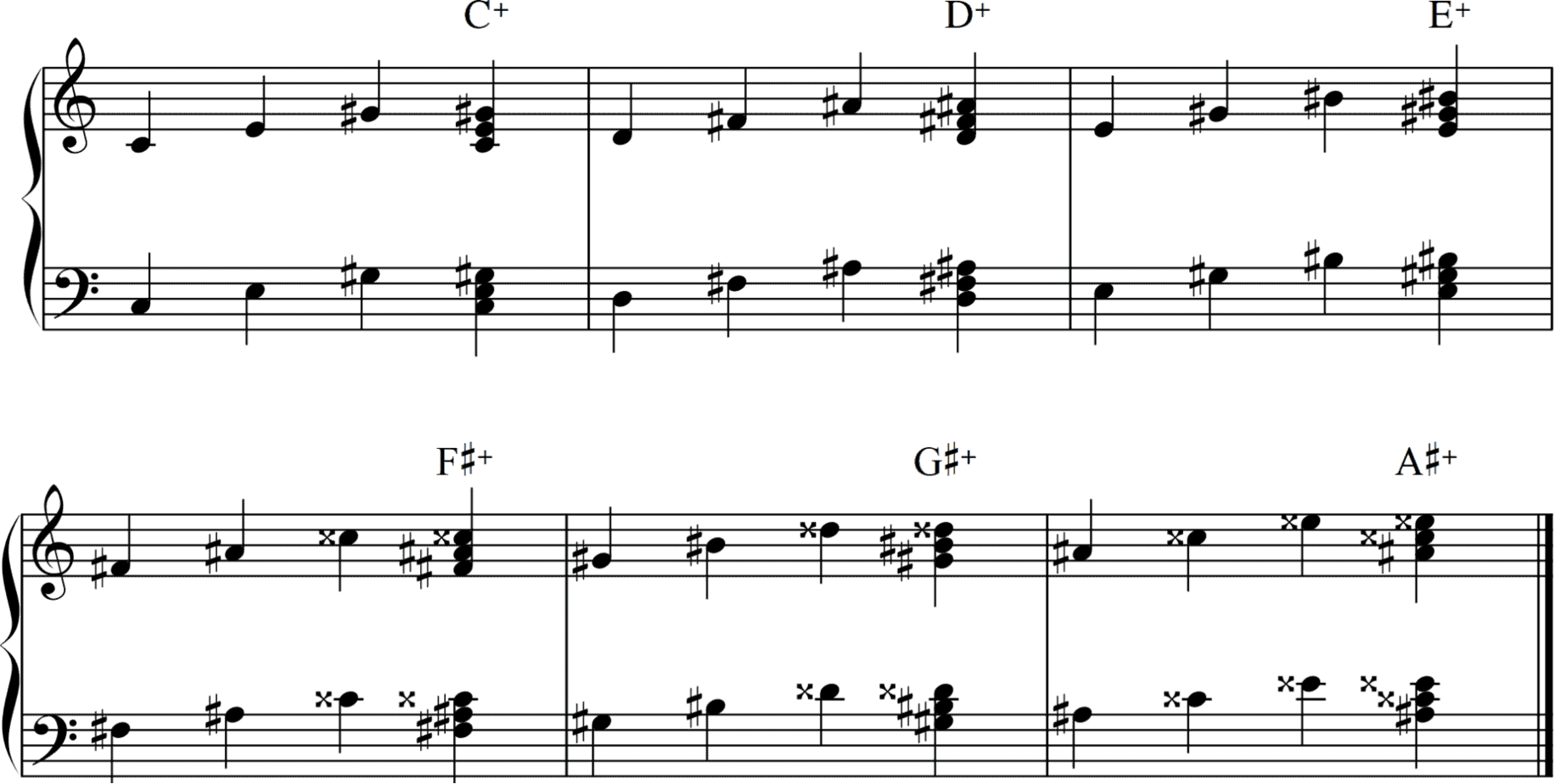 Obviously, nobody likes to look at the spelling of F#, G#, or A# augmented. Double sharps are no fun to read. But, what can you discern about the nature of the scale from these triads?

Here is an exercise you can practice to develop your facility for improvisation within the whole tone scale: 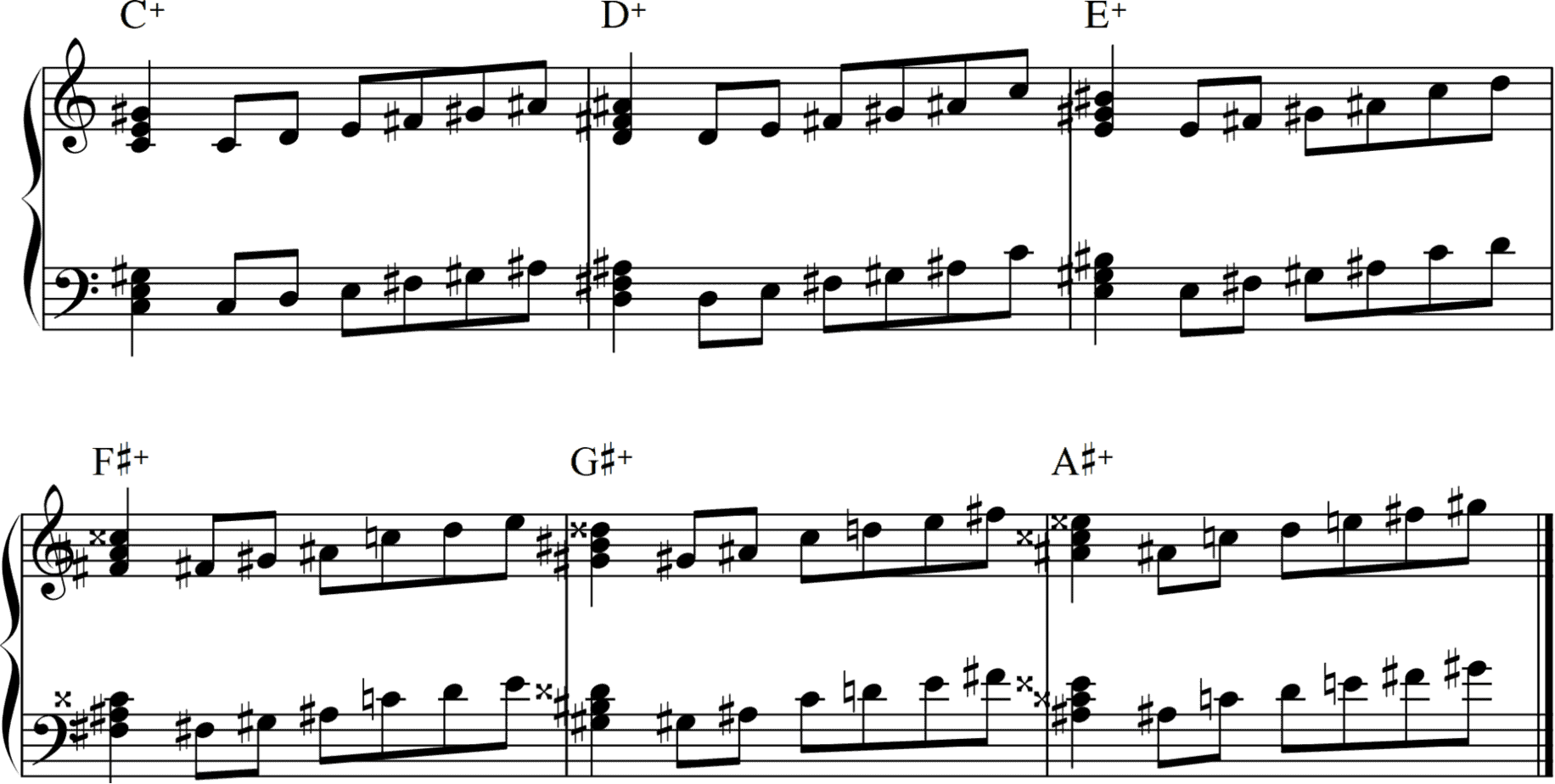 The Stevie Wonder tune “You Are The Sunshine of My Life” features a classic example of the whole tone scale in the song’s introduction.

Summing up the whole tone scale

The whole tone scale is an intriguing and ethereal sound. It is a symmetrical scale constructed from a repeating pattern of whole steps. It is also the combination of two augmented triads a major second apart. The whole tone scale consists of six notes and all the triads built from those six notes form augmented chords. The scale basically consists of that one sound.

If you are interested in learning more about different scales and other music theory topics like chords and intervals, or are simply looking for a fun and effective way to learn piano, Skoove offers lessons for every interest. With over 400 lessons ranging from beginner to advanced and a growing online library of articles on a wide range of topics, Skoove will help you open new doors to the wide universe of music. Try it out today!