Time signatures are one of the most important indications in notated music. We use them to help organize and measure music. They help us divide music into phrases and make it easier to memorize and understand more complex passages and songs. Without them, measures in notated music would run on forever, much like a sentence without any sort of punctuation.

What is a time signature?

Time signatures are what give a song its beat. The term “Four on the Floor” refers to dance music that will always be in 4/4 – four beats per measure because that’s the best beat to dance to.

But there are many other types that are worth discovering because they can create the most interesting beat.

In case you’re not sure what it is, it’s found at the beginning of all pieces of printed music just after the clef and the key signature. See the two 4’s stacked on top of another below?

How to read a time signature

Here is a quick cheat sheet:

Within each of these, the beats can still be broken down into faster notes. However, the printed music will always respect the basic beats, grouping faster notes together into the main beats. 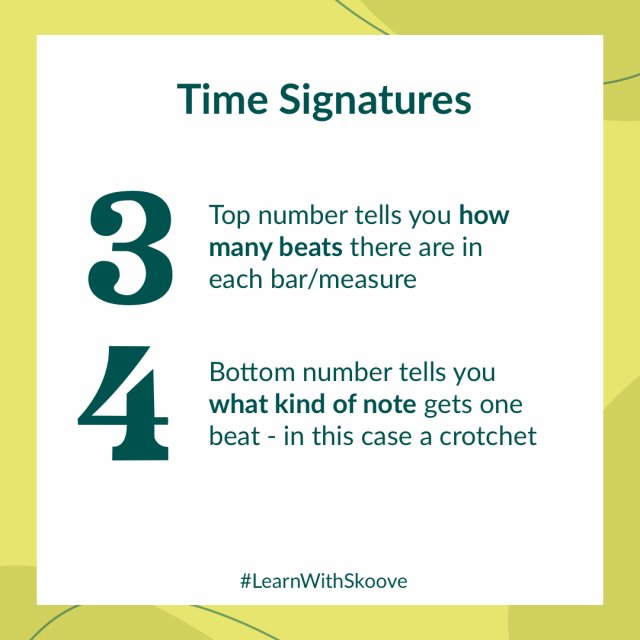 In a 4/4 time signature, there are four beats per measure and the quarter note receives one beat. A whole note takes up one entire measure in 4/4 time. There are 8, eighth notes in 4/4 time. Most of the songs with basic piano chords that you can learn with Skoove will be in a 4/4.

In fact, a 4/4 time signature is so common that it is often abbreviated at the start of a piece of music to a large C. This C stands for common time:

2/2, also known as “cut time” is also very common and it’s literally 4/4 cut in half. Each measure consists of two half notes. It sounds almost the same as 4/4 except it has a stronger accent on the 3rd beat of each measure (the second half note).

Cut time also has an abbreviation that looks like the common time symbol, but with a vertical line cutting through it:

2/4 is also a very common often used for marches:

In a 2/4 time signature, there are two beats per bar and a quarter note receives one count.

3/4 is the most used after 4/4 and 2/4.  With three beats per measure, it creates a lilting waltz time that was made hugely popular in Vienna by the great Johann Strauss II during the 19th century.

“Valse d’Amelie” is a beautiful waltz with a sad feel to it.  Learn it right now on Skoove

3/8 is very like 3/4 except it’s written with three 8th notes per measure instead of three quarter notes each measure.  Fur Elise by Ludwig van Beethoven is written in 3/8.
Learn to play “Fur Elise” – the beautiful and timeless masterpiece with Skoove.

5/4 is the most used “irregular”. 5/4 can be very attention-grabbing because it doesn’t fit neatly into an easy to understand rhythm as it feels “off-kilter”.

Here are two measures in 5/4 time. In the first one, you can see there are five quarter beats, so the notes are evenly spaced. However, in the second measure the first two quarter beats are broken into four 8th notes and the 2nd and 3rd are tied.

This second measure is a very common rhythm used in 5/4 and you’ll hear it in the jazz song “Take Five”.

Written by composer Paul Desmond, the song was made famous by pianist Dave Brubeck when his jazz band’s single became a surprise hit in 1961.
But 5/4 was used long before this.  Gustav Holst used 5/4 to create the opening of his masterpiece, “The Planets”, written between 1914-16.  He created dramatically cinematic music in “Mars – the bringer of war” which became the “sound” associated with space when it was eventually depicted in movies years later. It’s still played a lot in concerts and used in many TV shows and documentaries. See if you can count five beats per measure while you’re listening.

Another very famous piece of music in 5/4 is the theme from the TV and film series Mission Impossible (written by Lalo Schifrin).  In this great live rendition the conductor talks about how to count the time in a very entertaining way.

7/4 and 7/8 are used quite a lot and can be counted in different ways. Most often, they are counted with a group of four beats followed by a group of three beats.

You could get the same effect by writing a measure of 4/4 followed by a measure of 3/4, but it is easier for a musician reading the music notation if the time signature changes as little as possible.

All the time signatures we’ve looked at so far are called “simple” because each it can be divided into two equal sections.

But there is another type called “compound”. Compound are divided into groups of three. They consist of 8th notes grouped in threes – (so the bottom number will be an 8).

The most common compound time is 6/8. In 6/8 time, there are six eighth notes in a measure and the eighth note receives one count. Generally, 6/8 time is divided into two groups of three eighth notes. Here is the opening of the “Game of Thrones” theme tune in 6/8 time:

9/8 is made up of three groups of three eighth notes. There are 9 beats in a measure and an eighth note receives one beat. Here is the famous opening of Bach’s “Chorale” from Cantata No 147:

Dave Brubeck’s Blue Ronda A la Turk is an unusual take on the 9/8.

12/8 is made up of four groups of three eighth notes.

It’s worth mentioning that a piece in a compound time could also be written in a simple time using triplets to form the groups of three.

Beethoven wrote the opening of the Moonlight Sonata (op. 27 No 2 in C# minor) in cut time using triplets throughout:

If we rewrite these measures in 12/8, it will sound exactly the same:

You can learn to play this right now with Skoove:

Another great song that’s in 12/8 is “Perfect” by Ed Sheeran.

3/8 is very similar to 3/4 except that it is written with three 8th notes per measure instead of three quarter notes each measure.

Fur Elise by Ludwig van Beethoven is written in 3/8. Learn to play “Fur Elise” – the beautiful and timeless masterpiece with Skoove.

Although it’s the same as 3/4 in essence, you might assume that the piece will be played a bit faster in 3/8.  But always be guided by any instructions at the beginning of the piano sheet music, such as “Moderato” (meaning moderate speed) or “Presto” (meaning fast).

A composer can make a choice when it comes to time signatures – as you can see, there is more than one way to write a piece of music to convey the sound you want.

There are pieces of music written in much more adventurous time signatures. For instance, the gaming music “The Legend of Zelda: Ocarina of Time – Ganandorf’s Battle Theme” was written in a 23/16. This means there are 23 beats per measure and the sixteenth note receives one beat!

A composer can create whatever time signature they need. However, the person who is going to be reading and interpreting the music notation should be considered and clarity should be the aim.

“Praeludium 15 in G major” by J. S. Bach is written with a different time signature for each hand. Namely, 24/16 for the right hand and common time for the left.

A piece of music doesn’t have to stay in the same time signature the whole time, it can move as freely as the composer wishes from one to another as many times as they want.  Many songs and classical pieces do this.

A great example of a piece of music that changes time signatures a lot is “Short Ride in a Fast Machine” by John Adams. If you’ve never read an orchestral score before, you may find this very interesting. You only read across each page once as everything on the page is happening at the same time.

Notice that the first one is 3/2. This means there are three beats per measure and the half note receives one beat.

It changes often in this piece.  Within each time signature, listen out for more complex rhythms within the measures that make it sound like the time signature has changed again, when it hasn’t.

If you feel like you’ve been on a roller coaster by the end, the composer has achieved his goal!