If you struggle to remember the names of the notes when you’re reading piano sheet music, you’ll be interested to learn that there is more than one way to read music notes.  While it is important to be able to recognize and name the notes in order to place your hands in the correct position, it’s not so important to process the name of every note once you start playing.

There is an alternative and very effective way of reading notes, and that’s by piano intervals. This involves recognizing the distance between one note and the next without necessarily thinking about the names of the notes.

Reading music by intervals is not new, and yet it isn’t taught in traditional piano methods.  Fast sight readers often use this method as it’s faster and easier than processing the name of every single note.  Practicing interval reading will help you learn songs faster, sight-read easier, and help with your familiarity of the keyboard geography.

Reading music with piano intervals is very intuitive for most people.  It helps you to connect what your eyes are seeing to what your hands need to do in a more direct way, cutting out the middle step of naming the next note and therefore speeding up your playing.

Learning to read music in the past

It is interesting to observe how teaching approaches have changed over time. Just a generation ago most tutor books promoted ‘one note at a time’, a somewhat laborious method of learning to read and play. After a huge investment of time, students were able to read simple melodies and eventually some simple chords.

Today, in general, there is a much more intuitive approach to reading music. Beginner pianists learn to read by understanding intervals and developing their pattern recognition skills.

What are the types of intervals

There are five types of intervals we talk about in music theory:

Have a look at the following table which lays out in an easy visual way which intervals can be each type: 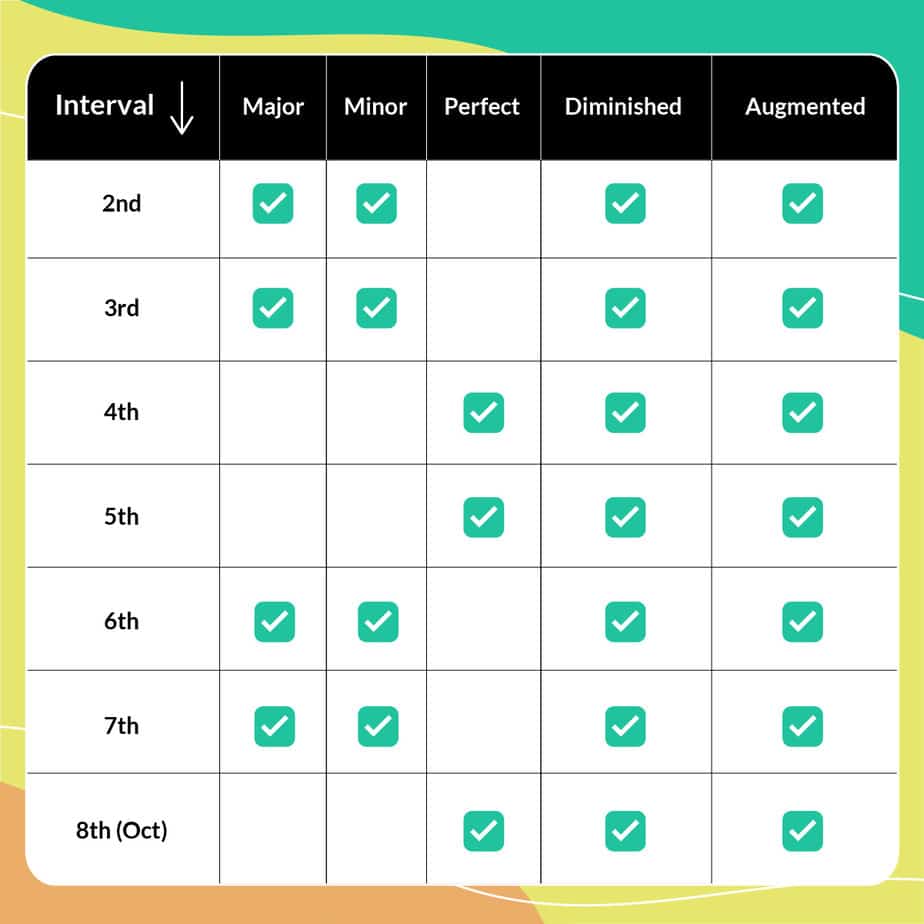 So that you can see each one of these music intervals in action, here is a sample of a third as a major, minor, diminished and augmented.  (A third can’t be perfect!) and reinforce your learning!

Starting to read music by intervals

Steps are notes that are right next to each other and played with the next finger.  They can move upwards or downwards to create melody in music.  Keep in mind that apart from notes moving up or down, they can also be the same note!

Take a look at these two notes:

You need to recognize the first note as middle C and the next note is one step higher. This is a major second.  Play middle C with your thumb and you can see easily that the next step up must be played by finger number 2.  This is the interval of a second.

Now have a look at two extra notes added on:

The third and fourth notes are also moving upward by a step and therefore played with fingers three and four.  You don’t have to think about the note names, but hopefully you recognize this as the beginning of a C major scale.

Now see if you can work the next exercise out by yourself:

Find the starting note, then simply follow the pattern of steps, this time descending. From there you can play any number of notes moving upward or downward by step. You don’t need to wait until you can recognise each note because you recognise the pattern.  Try this pattern:

We use the term ‘skips’ as the opposite of ‘steps’. It is very logical to play a skip by skipping a finger as well as a note. Now, let’s play some skips.  This is what a skip of a major third interval looks like in sheet music:

To play these two notes, play middle C with your thumb and then, skipping out note and finger number two, play note three with your third finger.  Notice how there is an unplayed note between the two you’re playing.  Now try this skip:

Notice that the second and third notes are the same!   This is another important pattern to notice.  Sometimes the sequence isn’t just skips or steps, sometimes it’s a repeated note.

The skip is an interval of a major 3rd (4 half steps). This interval is very useful in playing and reading chords.  Sometimes it might be a minor 3rd (3 half steps).  More about this later.

This is a brilliant exercise for anyone developing pattern recognition reading skills. For the richest learning, focus on the patterns and what it feels like for your fingers to respond to those patterns. See how you get on with this exercise which mixes steps and skips – remember both skips and steps can go up or down and keep in mind that all the notes are found in the C major scale.  In this exercise you only have to deal with white keys:

If you need more assistance with your practice, the Skoove app will help you place your hand correctly and ensure you are using the best fingers.

The Skoove app will also wait for you to play the right note, so you don’t even need to look down. This is such a good way to develop your keyboard orientation and listening skills.

A short piece to practice intervals

Try these notes.  You will need the note name of the first note which you will play with finger number three.

In this melody, there is one interval which is larger than a step (2nd) or skip (3rd), see if you can spot it.

Hopefully you noticed the interval of G down to D from the end of measure 2 into measure 3.  It’s played from the 5th finger to the 2nd finger spanning 4 fingers and a melodic interval of a 4th. You may like to play the piece again now with a focus on linking finger movement to interval size. The Skoove app will listen to your playing and give you instant feedback.

So far, we have been looking at melodic intervals. These are intervals which make up the melody.  Now it is time to turn our attention to harmonic intervals.  These intervals are written vertically and make chords.  In other words, notes that are played at the same time to create harmony in music.

Any sequence of notes played individually to create a melody are considered melodic intervals. More often than not you’ll find these played with the right hand on the piano.

Notes that are stacked together on the same beat and create chords are known as harmonic intervals.  These are most often played in the left hand on the piano. The most common is a stack of three notes known as triads, with the lowest note known as the root note.  Here are some C major chords:

The definition of triads

The word triad simply means “three notes”, otherwise known as a “chord”.  There are major and minor chords.  Triads are made up of two intervals of a third – a major third and a minor third. If the major third is at the bottom of the chord, it will give you a major chord.  If the minor third is at the bottom, it will give you a minor chord.  In music theory you will also find the diminished chord (which contains a diminished interval) and the augmented chord.

Now let’s take a closer look at how to recognize a major third and a minor third. These intervals are particularly important as they define the sound of fundamental chords.

How to recognize a major third

A major third is an interval of 4 half steps counting from the note next to the bottom note, like this:

Intervals at the piano keyboard

Understanding music intervals can support you in learning to read music faster, but intervals also support the development of keyboard geography or keyboard orientation. That means they help you build up a sense of the keyboard layout under your fingers so you will move with more ease and fluency across the piano.

Reading and playing by intervals

Through intervals, we can speak the physical language of our fingers as they rest on the piano keys, For example:

Start on C, now move up a step, now move up a skip, now move down a step. When you can name the final note you played (without looking down), you know you have a great physical connection to the keyboard. This is one way fluency can be enhanced.

It is important for beginners to build both the physical and mental connection and every practice session builds your skill.

Intervals and building a physical connection to the keyboard

It is time to play, this is all about using intervals to feel your way around the keys. Skoove will give you guidance and instant feedback on your playing so you don’t need to look down. This is a great way to heighten your sense of touch. Skoove’s Mix and Match course is a great way to build your skills.

The summing up intervals

Now enjoy practicing your new skills: You have learned and played intervals of a 2nd, 3rd, 4th and 5th.  You will begin to recognise intervals of a 6th, 7th, and 8th (or octave).

For now, though, have a look at this evocative piece of music. Here, you explore larger intervals in the left hand and revisit familiar ones in the right hand.

Intervals support pattern recognition making it easier to learn to read music. They are the language of your fingers, meaning they encourage a good physical connection to the keyboard. Enjoy unlocking new reading, listening and playing skills with your new interval knowledge.