Join in the fun and celebration of World Music Day this month with Skoove. Music is a wonderful and beautiful force and what better way to celebrate the power of music than with an all-day celebration around the Summer solstice! Learn more about this wonderful day, some of the history behind the idea and event, its origins, and its current reach.

What is World Music Day?

World Music Day was originally launched in 1982 in France and called Fête de la Musique. It was conceived as a revolution in the world of music. All types of music, regardless of genre or practice, would be brought together and celebrated.

The history and significance of the day

The event was created because the French Ministry of Culture realized the proportion of people practicing and playing instruments was so large compared to the possible performance opportunities. So, they decided to create a festival where everyone was welcome to come and play.

The first event was a huge success. According to Maurice Fleuret, the Director of Music and Dance in the French Ministry of Culture, and main architect of the event,

“There was a need for an event that measured the place of music in individual and collective life. A spectacular movement of awareness, a spontaneous impulse to alert the public and perhaps also… the political class. This is why the Ministry of Culture had the idea of organizing a Music Festival in 1982. A non-directive party that brings together all the French for whom music matters.”

How to celebrate World Music Day

The beautiful thing about World Music Day is there are no set rules for how you can participate. You can participate however you like! Whether you want to attend a concert or gathering in your area, jam with some friends at home, or just hang out and listen to some new music or old favorites, anything goes! 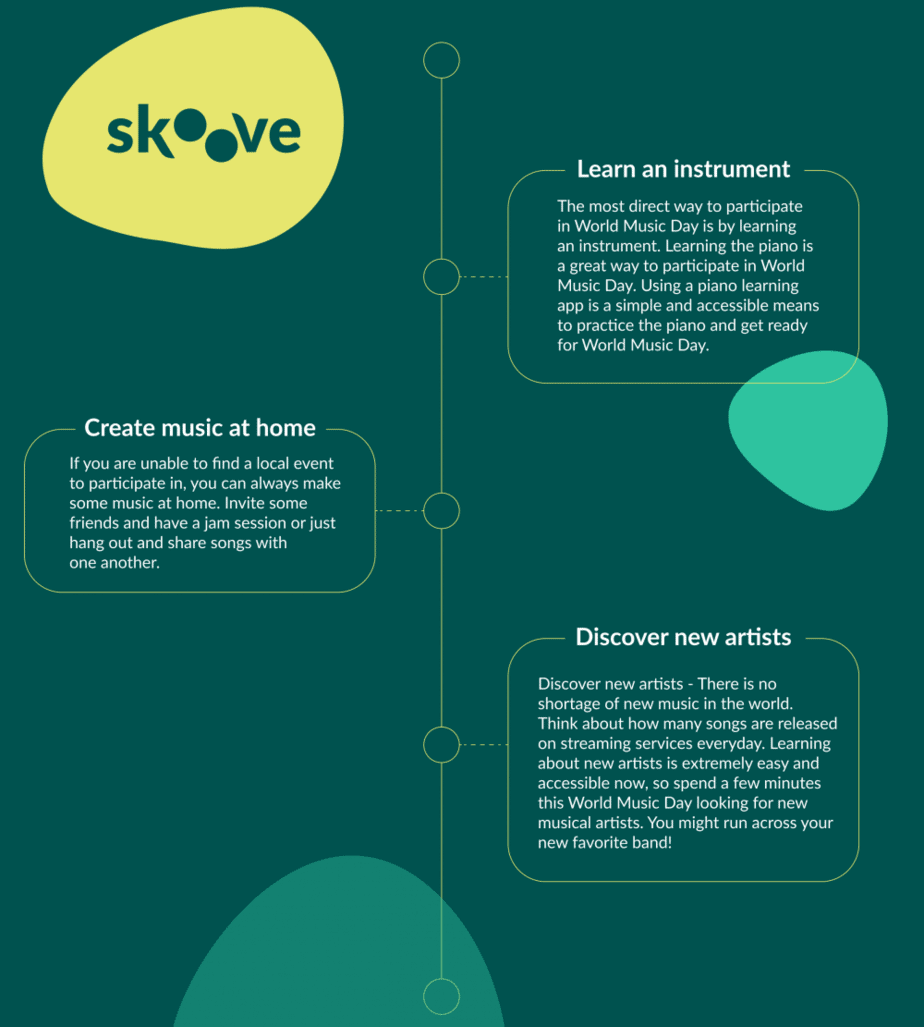 If you are unable to find a local event to participate in, you can always make some music at home. Invite some friends and have a jam session or just hang out and share songs with one another.

Music is both a solitary and social experience – if you only practice by yourself, you are missing at least half of the equation! So bring some friends, jam on a few simple piano chords, and have a great time!

There is no shortage of new music in the world. Think about how many songs are released on streaming services everyday. How many of those songs have you listened to? Learning about new artists is extremely easy and accessible now, so spend a few minutes this World Music Day looking for new musical artists. You might run across your new favorite band!

Exploring the history of music

Another great way to celebrate World Music Day is to explore the music of past masters and learn some of their piano notes. Whether you favor classical composers like Beethoven or Bach or rock heroes like The Beatles or Queen, there is no shortage of great music to explore and learn.

Ludwig van Beethoven was a German pianist and composer. He was a key figure in the rise of Romanticism in European classical music. By all accounts, he was a flamboyant and daring figure. Unfortunately, Beethoven began developing deafness around age 30, leaving him almost entirely deaf by the end of his life.

However, Beethoven composed some of the most iconic and memorable works of classical music. His symphonies are still widely performed and studied and his piano sonatas are practiced by nearly every pianist at some point.

Johann Sebastian Bach was also a German composer and organist. He was one of the defining figures of the Baroque era in European classical music. His innovations in harmonic language and rhythmic and motivic development pushed music into new territories. He was functionally employed by the Church for most of his career, and as such, his catalog of compositions is primarily rooted in Church music.

One of the most influential bands of the rock and roll movement in the 1960s, The Beatles produced some of the most memorable melodies in music. The combination of John Lennon, Paul McCartney, George Harrison, and Ringo Starr only produced a handful of studio albums, but their presence made a powerful impact on the direction of music, the capabilities and technologies of recording studios, and the general directions of style, fashion, and lifestyle that would develop in the decade.

Another highly influential British rock band, Queen was formed around 1970 in London by guitarist Brian May, pianist and vocalist Freddie Mercury, drummer and vocalist Roger Taylor, and bassist John Deacon. The band scored major hits with their albums A Night at the Opera and News of the World. Many of their songs are now classic hits that many pianists learn.

World Music Day was created in 1982 by Maurice Fleuret and the French Ministry of Culture.

What is the significance of World Music Day?

World Music Day is an event where all types of musicians from any genre or style can come together and make music.

World Music Day is celebrated in many different ways across the globe. It is a chance for musicians of any style and background to showcase their unique talents and to share their culture with an audience that may otherwise not hear it.

World Music Day is a great chance to get out and meet some musicians in your area. Whether you are just starting out with the piano, or are an advancing pianist, it is always beneficial to meet new musicians, hear new styles, and find inspiration in new places. Find a way to participate with Skoove this June 21 in World Music Day!